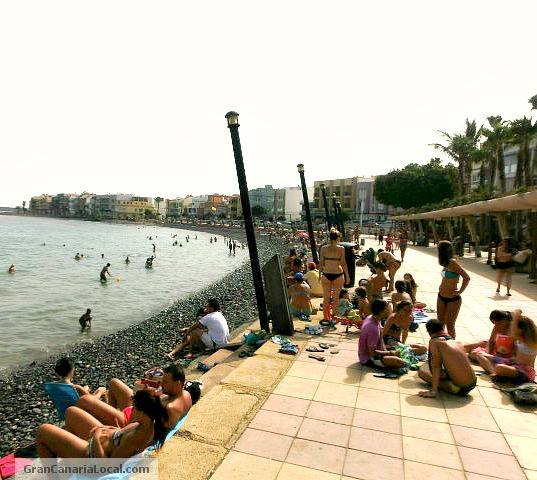 We hadn’t been to Arinaga for a while. So it was great to be shown around semi-forgotten territory by resident expert Charles Beresford, who runs The Speaking Workshop. We’ll be meeting regularly with locals as we journey around our sub-tropical paradise. Whether they be Canarians or expats.

The first stop on our magical mystery tour was the suitably odd La Vaqueria de las Salinas. As much restaurant as bar, its signature dish is cochino negro de Agüimes, black pork from the nearby town of Agüimes. It’s also a shop and an old curiosity one at that, with a display of typewriters that aren’t for sale plus goats’ cheese which is.

The university of life

“I’m gannin’ to see a man about a dog” and “I’m taking the dog for a walk” are the classic cover stories used by Geordie males to their wives. To disguise their actual aim of supping on a Newcastle Brown Ale in their local. That’s why Newky Brown’s also known as Dog. In the same spirit, Arinaga’s oldest bar is called La Universidad. Opening in the 1950s, Arinaga husbands would reply when asked by their missuses where they were going, , “Why, to the university dear”. A barter economy existed here, where in exchange for a beer, punters would bring an egg. This also helped to prevent regulars drinking on an empty stomach.

A boat by the sea

Sadly, La Universidad was closed. Maybe it’s because we weren’t visiting during term time. However, Charles had an alternative, La Barca. The Boat’s closer to Arinaga’s beach. It made a very pleasant end to our itinerary where we people-watched in the shade as the sun shined bright. Enjoying one or two cañas in the process. Thank you, Charles, for the perfect afternoon.