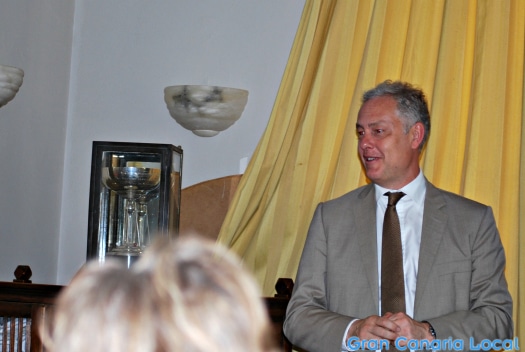 Britain’s recent decision to leave the European Union has cast the futures of Brits living in Spain in doubt. What’s around the corner in these post-Brexit times? Mr Gran Canaria Local attempted to find out by attending a visit to Gran Canaria by British Ambassador, Simon Manley CMG.

As Gran Canaria Local’s leading guide, we’re often invited to events which regrettably we haven’t always got time for. We cleared our diary, however, for Simon Manley CMG’s talk at the British Club, all about the repercussions of Brexit. Joining representatives from a host of international schools on the island, including the British School of Gran Canaria.

Simon Manley CMG succeeded Giles Paxman as Her Majesty’s Ambassador to Spain and non-resident Ambassador to Andorra in October 2013. His love affair with Spain dates back to 1996, however, when he first visited the country to buy cava for his wedding to María Isabel Fernández Utges, a prominent Catalan lawyer. Manley operates out of Madrid.

The British Ambassador’s in the midst of a nationwide tour, travelling the length and breadth of the Iberian peninsula and its islands following the UK government’s triggering of Article 50. He arrived on Gran Canaria on Wednesday 26th April, heading over to the island from neighbouring Tenerife. After an introduction in Spanish from the native British Club president Diego Cambreleng, Manley gave a talk in Castilian before switching to English to answer questions from the floor.

Manley reassured the sizeable expat presence in the audience that their rights as EU citizens are currently unaffected. He admitted that he’d been surprised by Theresa May’s call for a snap election. What the British Ambassador couldn’t do was offer any guarantees to what the future might bring, although he remarked that Spain is as concerned for its citizens living in the UK as the UK is for Brits residing in Spain which will have a significant impact on continuing post-Brexit negotiations.

As the question-and-answer session drew to a close, British School head Julian Clarke half-jokingly enquired if the Ambassador could return in a year when he could give more definite replies. As the laughs subsided, Manley insisted that Gran Canaria expats shouldn’t “sit around waiting for me” and he urged those present to keep up to date with developments by following the British Embassy in Madrid on Twitter. Before smiling and encouraging anyone with “even more time on their hands” to follow him.