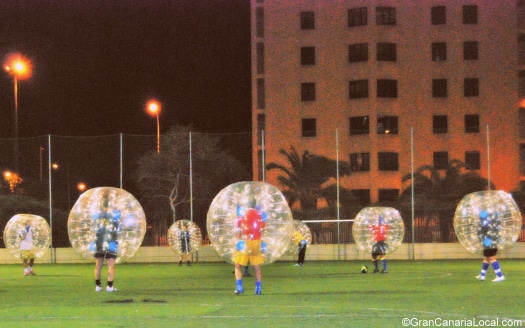 Mr Gran Canaria Local’s no stranger to the football pitch. Whether it’s watching his three boys in the colours of CD Vegueta Árbol Bonito or playing himself. But he’d never tried bubble football.

Then Bubble Fever kindly offered to provide the special bubble suits for Mr GCL and his regular Thursday night teammates and opponents to wear during their game free of their usual charge. They’re new to Gran Canaria. After already launching in Barcelona, Tokyo, and the UK.

Ordinarily, Bubble Fever will supply the equipment and coordinators. They leave it up to you to come up with 10 players and a pitch. However, they can help if you’re short of numbers or don’t know of a venue. This would be especially handy for visitors who are only going to be in Las Palmas de Gran Canaria for a short time.

Despite watching bubble football videos in advance of the game, nothing could prepare Mr Gran Canaria Local for what was to come. We’ll tell you why. By way of three random observations:

Mr GCL had communicated with Bubble Fever’s Enrique Suárez before the night in question. He’d seen photos of people playing bubble football. But the sight of 10 pumped-up bubbles spooked him somewhat.

They look not unlike The Prisoner‘s Rover. The huge balloon that stopped Number Six and fellow prisoners escaping. Touching them before we play, we’re struck by how sturdy they are.

2. Playing in a bubble’s one hell of a workout

Mr Gran Canaria Local’s heard of binliners being worn by professional footballers during training. This can be used to acclimatize players in preparation of a game in warmer weather than they’re accustomed to. Although the old school use was for players to sweat out the night before during the morning after’s training.

It’s sauna-hot in the bubble. So that must burn off some calories. As well as carrying the thing around. In the end, we play half an hour of Bubble Football and half of regular football. The second half hour’s a lot easier as we all feel much lighter.

Word got around that a Bubble Football game was going to take place. Looking into the crowd, Mr GCL could see teammates of his sons recording the action with their mobile phones. And whilst playing, we could hear the laughter when somebody got bounced.

Playing Bubble Football’s not dissimilar to being in a bumper car at the fairground. You get a buzz from bumping into others when they’re not aware. But when it happens to you, the jolt of shock’s quite jarring.

Although your body doesn’t feel much, protected as it is by a fully-inflated bubble. Mr Gran Canaria Local earns a cheer with the first goal of the night. But the cheers fade away with the crowd after we take our bubble suits off. Playing to our usual audience of the next teams waiting their turn on the pitch.