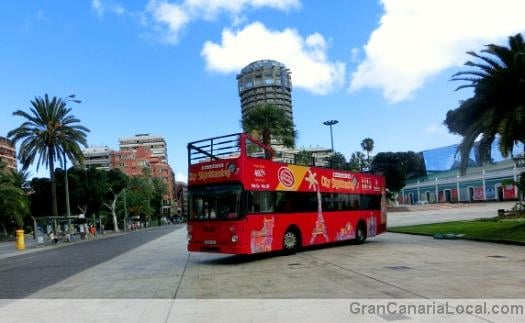 City Sightseeing Las Palmas, come on and do the frog

The ethos of the City Sightseeing Las Palmas de Gran Canaria Tour’s very much a hop-on, hop-off one.  Whether you want to see the major sights or shop until you drop, it’s ideal. Get on and, erm, get off wherever takes your fancy.

Counting the centimes in Gran Canaria

As expats in the Canary Islands, one of our fave resources is Money Saver Spain. Inspired by their cost-cutting ways, we’re happy to point out the €17,00 adult fee (€8,00 for kids) ain’t too cheap. Chiefly as Las Palmas de Gran Canaria can’t boast the sights of other City Sightseeing Tours like Barcelona, London, and Rome. So, we’d advise shelling out €29,25 for the LPA Tourist Pack which gives you an LPA Card to use to enter the city’s museums for free plus a City Sightseeing Las Palmas tour bus pass.

Whilst your ears hear more filler, as in instrumental interludes, than they would on the equivalent tour of Edinburgh, say, the audio commentary’s well worth tuning into. It’s also more English than Spanglish in pronunciation. Which makes it, ahem, music to your ears.

When we lived in London, we genuinely enjoyed house guests. Because it gave us a chance to see parts of the capital we hadn’t been to in a while. And residing in Las Palmas de Gran Canaria, it’s great to learn something new. For example, we thought the statues near the Hotel Santa Catalina featuring what we assumed to be scantily-clad athletes had something to do with the Olympics. Until we discovered they were actually canarii warriors hurling themselves to their deaths from the Fortaleza Grande. This hara-kiri-style sacrifice was more popular than surrendering to the Spanish conquerors.