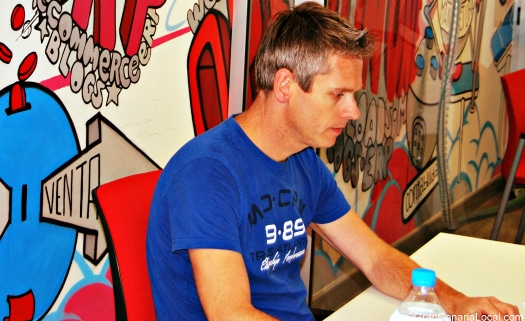 The New York Times recently namechecked Las Palmas de Gran Canaria as one of the most perfect locations for digital nomads. So, Mr Gran Canaria Local decided to visit one of the city’s coworking spaces. To find out what all the fuss was about.

Have a Meeting. Write Some Code. Surf Gran Canaria. Tempting proposition, ain’t it? So Mr GCL hauled his ass over to Alcaravaneras. To visit CoWorking Canarias, just two minutes away from the beach. Here’s what he made of it all.

1. CoWorking Canarias attracts coworkers from near and far

We’re greeted at CoWorking Canarias by herd leader, Nacho Rodriguez. A civil engineer by original trade, Nacho looms over Mr GCL. But as well as being a commanding presence, he’s an approachable one. As a couple of digital nomads interrupt our conversation to enquire about the ins and outs of buying land in Fontanales.

Despite studying at Boston University, Rodriguez is Las Palmas born and bred. As is be the light publicist, Joel León Navarro. CoWorking Canarias is his office as Mr Gran Canaria Local notices when Joel hands him his business card. For he lists his workplace as CoWorking Canarias’ postal address.

Mr Gran Canaria Local spent his formative years in Nottingham. So he was delighted to run into a fellow Notts lad in Vincent Lee. Our Vince currently divides his time between Brighton, Berlin, and Las Palmas de Gran Canaria.

Lee sits in front of four monitors, although ordinarily he claims to use five. Looking at him, Mr GCL’s reminded of the scene in which David Bowie’s Thomas Newton stares at 12 TV screens in The Man Who Fell to Earth. The native East Midlander explains he needs so many monitors as he’s a Web scraper, collating data from the Internet. Vincent also describes himself as a Google/SEO consultant.

3. Gran Canaria’s great for workcations as well as vacations

People come on holiday to Gran Canaria all year round, mainly in winter months from northern Europe. Attracted by its eternal spring. And Las Palmas de Gran Canaria’s second only to Chile’s Viña del Mar, in terms of cities with the world’s best climate.

So you can understand Holland’s Jeroen Baidenmann, who we first met at Gran Canaria Business Week, wanting to escape a harsh Dutch winter. And whilst his family holiday in San Agustín, he uses CoWorking Canarias as his workplace. Now who fancies joining him here?