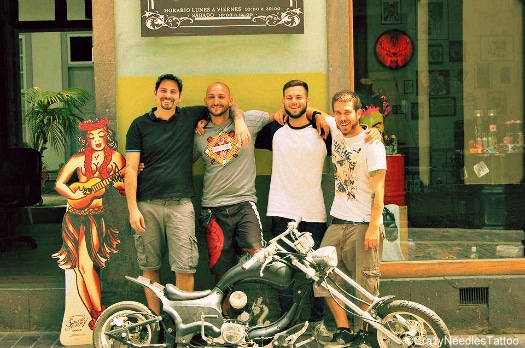 Mr Gran Canaria Local’s certainly no hipster. Yet that doesn’t stop him trying to infiltrate their world every now and again. Which explains why he finds himself stripped to the waist in Las Palmas de Gran Canaria’s achingly trendy Pérez Galdós.

But we’re getting ahead of ourselves. Every Thursday night Mr GCL makes his way from his Arenales base to his weekly game of seven-a-side football in San Cristóbal. Walking through Pérez Galdós in the process.

One of the first places he passes is Crazy Needles Tattoo. Long has he paused outside its entrance, momentarily losing his cojones each time he willed himself to go in. Until one day, he found his balls and went in.

Although, there had been some preparatory work done before Mr Gran Canaria Local finally got his tat. Some of it not so recent. Here are the three steps Mr GCL took to getting a tattoo at Crazy Needles Tattoo.

Mr Gran Canaria Local has always been fascinated by tattoos. Whilst more conservative mates of his have sneered at them for being tacky, he’s always seen them as works of art. Pointing out that they’re not known as tattoo artists for nothing.

In his sixth-form days, a quarter of a century ago now, the boy every other boy looked up to and every other girl looked over was Russell. Back then, Mr GCL could replicate this role model’s man bob. But he kept putting off getting a rose tattoo like Russell’s.

When Mr Gran Canaria Local first got in touch with Crazy Needles Tattoo owner Seila, it was to arrange a long overdue rose tattoo. However, he had little luck finding an image of Russell’s rose. And Crazy Needless Tattoo artist Carlos Ojeda’s suggestion bore little resemblance to the rose of memory either.

So, Mr GCL changed tack. If it wasn’t to be an English rose, it was to be a Canarian drago. However, as Seila pointed out to him, a dragon-tree silhouette looks less like a tattoo than an indecipherable stain.

Noting his disillusionment, Seila made one final suggestion. How about referencing a pintadera? Pintaderas were stamps used by the canarii in a number of ways, with some archaeologists speculating that the aborigines applied natural dye to their bodies with them for decorative effect.

Pintaderas tended to be geometrical in shape. It’s this intricacy which Carlos Ojeda will later sweat over. As his brow becomes ever more furrowed, tracing into the solar design Mr Gran Canaria Local has gone for.

Sitting in one of the parlour’s back rooms, Mr GCL feels a little bit like as if he’s in the dentist pre-drill. But he knows what a drill feels like. Quite what sensation the tattoo machine Ojeda’s wielding will lead to is beginning to worry him.

He needn’t have fretted. As soon as the needle goes in, the pain is slight. It’s a nagging discomfort, a minor irritation. Like a sting from a mildly-irked infant wasp, which subsides when Carlos finishes an hour later and both men break out into a contented grin.

Disclaimer: We were treated to a complimentary tattoo by Crazy Needles Tattoo in exchange for a review. Typically a tattoo with this level of design and diameter will cost around €100. Mr Gran Canaria Local has already restarted a piggy bank to save up for his next one. Crazy Needles Tattoo have since moved to a new base in Triana, on Calle Peregrina.