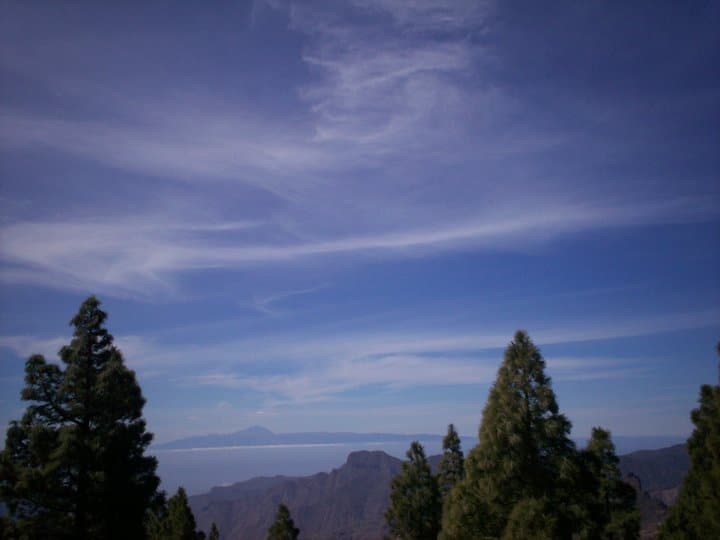 On the ever-quotable An Idiot Abroad, Karl Pilkington claims: “You’re better off living in the hole looking at the palace, than living in the palace looking at the hole.” That sounds utter horseshite. Before you meditate on this for a while and concede that hold on there for a God darn minute but yes, the boy Pilkington does actually have a point. And GC’s Cruz de Timagada is as good a place to meditate as any.

On a not-unrelated note, the inhabitants of Gran Canaria insist they have the better view of Spain’s tallest mountain, Teide in Tenerife, than those who live on the same island. You can probably guess what the tinerfeños, Tenerife natives, think. Judge for yourself with this snap taken from just above the Cruz de Timagada, deep in the interior of GC. A mere 62 km (38.5 miles) separate the two islands, but, unbeknown to most, the pair are located in different provinces.

The province of Gran Canaria includes the other easterly isles of Fuerteventura and Lanzarote whilst Tenerife province also comprises the more westerly El Hierro, La Gomera, and La Palma. Inter-island rivalry exists, especially on the football field. So when CD Tenerife and UD Las Palmas play each other, it’s a proper derby. Indeed, just like scaling the heights of Teide, it’s not for the faint of heart.

Extra! Extra! Read all about it!

Not long after I originally penned this piece, I travelled to La Gomera to report on the effect the forest fires was having on tourism. So I can now confirm that the best view of Teide is neither from Gran Canaria, sorry Cruz de Timagada, nor Tenerife. But from La Gomera. I especially enjoyed the one I saw from a Chipude terrace which coincided with the most perfect sunset. Resembling as it did, Karl Pilkington’s circular head.