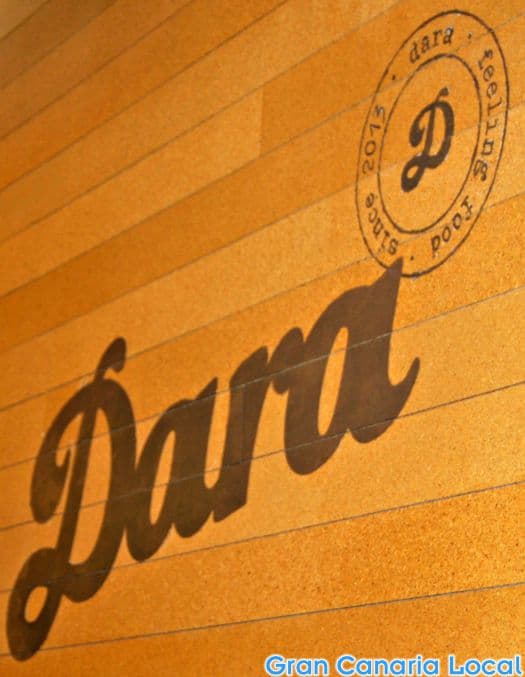 No other guide to the island reviews as many restaurants on Gran Canaria as us. Fact. So, if you’re looking to dine in some style on GC, consult us first.

Our latest meal out on the island was at Las Palmas de Gran Canaria’s Dara Feeling Food. Following a personal invitation by owner Dara Bello O’Shanahan. Dara was busy cheffing when Mr Gran Canaria Local pitched up during peak service, but dropped by his table as the lunch bunch began to disperse.

In a first for this blog, we’re going to follow the format of our last review. First, we’ll tell you how to get to and from Dara Feeling Food. Before describing in pinpoint detail what we ate and drank there.

1. Dara Feeling Food: the ins and the outs

You can more or less draw a straight line between the Gran Canaria Local family home on Ángel Guimerá and Dara Feeling Food. Mr GCL managed to drop two postcodes to reach Ms Bello O’Shanahan’s gaff at General Bravo 36 in under 20 minutes. Travelling using his favourite mode of transport on the island: his own two feet.

Dara Feeling Food open for business Monday to Friday from 9:30am to 4:30pm, for breakfast, brunch, and lunch. They offer vegetarian cooking classes one Saturday each month as well. Handy for locals who work in or around Triana, Dara Feeling Food’s also a magnet for visitors as it’s very much on the tourist map. What with its downtown Las Palmas de Gran Canaria location.

As well as the kitchen’s commitment to sexed-up healthy/hearty fayre, a lot of thought has gone into the interior. For a start, it was designed by renowned local architects, Moba Showroom. Owner Dara wanted to convey her brand’s three key values: organic, simple, and low-cost.

After his lunch date, Mr Gran Canaria Local made his way to Parque San Telmo bus station. As he had a spot of business to attend to down south. So anybody travelling into the capital will be happy to hear that there’s a distance of 600 metres between the two. Which Google, as Mr GCL discovered, were correct in estimating as a seven-minute pedestrian journey.

Mr GCL was ordering from the menú del día. For 12€, you receive a starter, main course, bread, drink, and tea/coffee. Mr Gran Canaria Local ordered the white wine which was light and fruity.

To finish off, Mr GCL plumped for a herb tea. He’s been drinking camomile since his vegan days and manzanilla‘s one of the most popular infusions on Gran Canaria. The Dara Feeling Food one came with honey which helped fill the dessert-shaped hole in the meal.

The owner Dara later explains that they serve Ingenio‘s famed pan de puño at breakfast. But for brunch and lunch, they make their own. The soda bread, perfected during Dara’s 14-year-long culinary adventure in her family’s original homeland of Ireland, is delightfully flecked with apple, courgette, and fennel.

What Ms Bello O’Shanahan also let slip is that the veggie burger Mr Gran Canaria Local so recently enjoyed at 200 Gramos was designed by her. She tells him that as well as beetroot, its recipe includes carrot, oats, herbs, lime, and cumin. The last ingredient clears up the confusion Mr GCL felt when detecting an Indian influence on the burger, with his taste buds not helping him to identify it.

This warm soup’s sweet potato and pumpkin are grown on Dara Feeling Food’s own land, in El Sabinal. This is fertile ground above Las Palmas de Gran Canaria. It’s a place that’s like a drive-in carwash, given the amount of rainfall it receives.

Any vegetables which the kitchen doesn’t use are sold to customers on the premises. You see them in cardboard boxes below a well-stocked pantry. This is recycling at its tastiest, with customers able to take home the key ingredients of their meal.

The main course is every bit a palate pleaser. As a vegetarian, Mr Gran Canaria Local opted for the gluten-free pastelitos de quinoa, queso de cabra y ensalada rather than the seafood feast of tacos de emperador marinades con fideos al horno con guisantes y gambas. The salad’s a revelation, as despite being well dressed with palm-tree honey, lemon, and olive oil; it’s got more bite than Luis Suarez. This is one ensalada that’s most certainly not for wimps.

Disclaimer: Dara Feeling Food treated Mr GCL to a complimentary set lunch. We remain firm in our desire to share with you the island’s best restaurants. Naturally, we’re open to your suggestions.