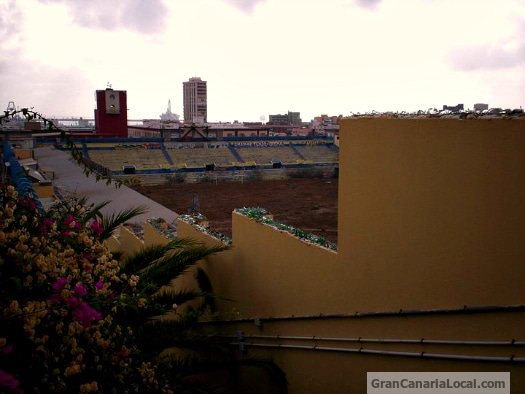 The birth of Gran Canaria Local

And if you know your (UD Las Palmas) history

The saddest sight for a football fan, no matter who they support, is the former stadium. Especially when it’s been allowed to wallow in its own decline – as is the case here. Built in 1945, the 21,000-capacity Estadio Insular housed Unión Deportiva Las Palmas. Before they moved to the 31,000- all-seater out-of-town Estadio Gran Canaria. Yes, they went and did a Derby County, didn’t they.

The stars of the show at the Estadio Insular

I fondly recall watching Argentinian winger Walter Pico, a lower-league version of Messi, at the Estadio Insular. He mezmerized opponents, and even his own UD Las Palmas team-mates, with his dazzling dribbling. When I interviewed former Barça star Bolo Zenden, he told me it was one of his favourite away grounds. Because it was so compact. Not so the Estadio Gran Canaria. Where an athletics track kills passion like a bedroom fart. Ironically, the club are now considering removing the athletics track. In order to improve the atmosphere at games.

At the cemetery gates

And what about UD Las Palmas’ Estadio Insular? What of its future? Is there a happy ending on the horizon? Well, there’s been talk of a residential development. Or even a jumpers-for-goalposts type of park. And, boy, does the not-as-green-as-it-could-be Las Palmas de Gran Canaria need another of those. For now, though, it’s a football graveyard. And not a particularly well-kept one at that.