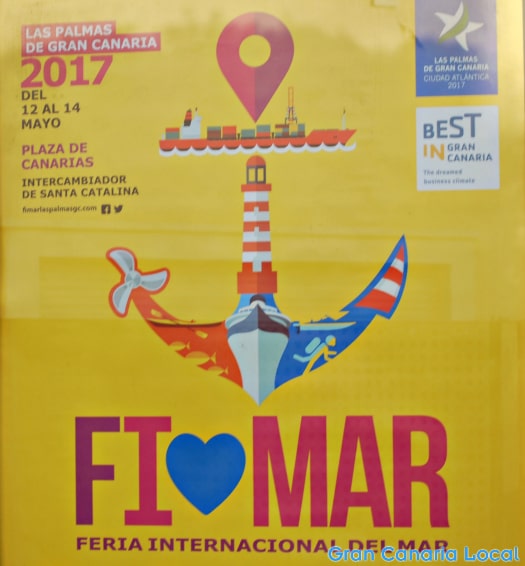 As the main mid-Atlantic port, Las Palmas de Gran Canaria’s also known as Ciudad de Mar. And the Gran Canaria capital will celebrate its Sea-City status, along with being awarded Atlantic City of the Year, at FIMAR 2017.

Essentially FIMAR’s a trade show for professionals employed in the maritime and nautical job sectors. The theme for 2017 , the fair’s seventh year, is 19th-century traditional fishing and navigation. However, FIMAR 2017’s held in a public open-air place (more on that later) and is free to enter.

There will be gastronomic displays of chefs preparing fishy/seafood-based recipes which you’ll then be able to sample. Along with marine-life exhibitions. And let’s not forget the family-friendly ocean-based activities.

FIMAR’s easy to reach by blue Global or yellow Guaguas Municipales bus, as the 124 tents representing the 91 companies invited to promote their businesses will be pitched in the Gran Canaria capital’s Plaza de Canarias. This square’s situated in front of Intercambiador de Santa Catalina (Las Palmas de Gran Canaria’s second bus station). There will also be events in Parque Santa Catalina itself (within the Edificio Miller and the Museo Elder), Las Canteras’ Plaza Saulo Torón, and the Puerto de la Luz which will house the nautical activities.

The tents will be open from Friday 12th May to Sunday 14th May between the hours of 10:00am and 8:00pm. On the Friday, look out for regattas and sailing ships in training on the water between 3:00am and 6:00pm. Whilst in the Museo Elder, there’s a guided tour of the Cetaceans in the Canary Islands exhibition at 4:00pm.

Saturday highlights include the free BlueBird shuttle boat service between the Santa Catalina Pier and El Muelle Deportivo from 10:30am and 7:00pm and foodie goodies from the likes of I Cook For You‘s Raúl Santana between 12:00pm and 1:00am, Ángel Palacios of The Brasserie By Traddiction from 1:00pm-2:00pm, and Alejandro de la Nuez from Santa Mónica Suites Hotel‘s Restaurante Arena. The BlueBird also sails on Sunday (10:30am-3:00pm) and there’s a Grand Nautical Parade setting off from the Santa Catalina Pier at 12:00pm. The master chefs in action on FIMAR’s final day include El Chef en Casa‘s Imad Atli with his signature Atún con mango (Tuna with mango) from 1:00pm to 3:00pm.