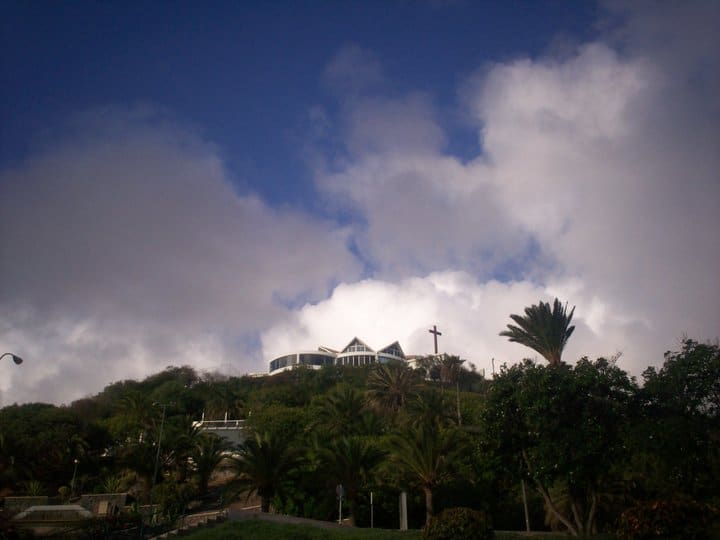 A church. A church on a hill. But not any old church nor indeed any old hill. For this is the Full Gospel Las Palmas Church, offering a place of worship to the many Koreans who have made the city their home.

Las Palmas is not quite New Malden’s Little Korea. Yet the Korean community are one of a number of Asian descent to settle here, with the other main two being Chinese and Indian. LP, clearly, is much more cosmopolitan than other provincial metropolises in Spain.

Full Gospel Las Palmas Church’s congregation dates back to South Korean migrant workers who moved to the island in the 1960s to work on deep-ocean fishing boats based on the island starting in the 1960s. By the 1970s, around 7,000 Koreans resided in Las Palmas, accounting for roughly 2% of the city’s population of 350,000. This number has decreased to just over 1,000, owing to the decline of the fishing industry.

Some of the best food I’ve eaten on the island has been Korean. I fondly recall a Korean stall at the American School’s famous Food Fair. Along with a now-sadly closed Korean restaurant close to the Mercado Central in Alcaravaneras. Where the owner used to prepare me a juice made of apple, celery, onion, and a secret ingredient he never did divulge.

Situated above the appropriately-named club for hire Terazza El Cielo, Sky Terrace, the Full Gospel Las Palmas Church’s Altavista location affords excellent views of surf and turf: the Atlantic Ocean and the pretty Parque Doramas below. I’ve often walked past on the way to ferrying my sons to football matches and have just about resisted the temptation to pop my head through the door. One day I’ll do so but if the scene before me is anything less spectacular than this, I’m going to be tin-can crushed by disappointment.