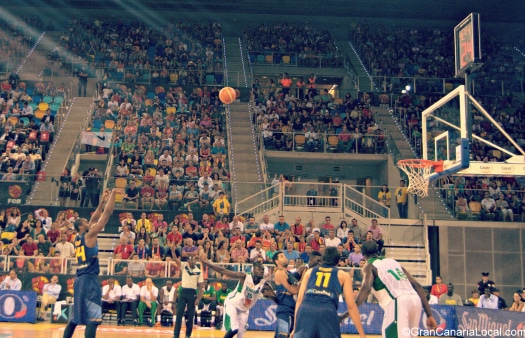 On Sunday, Mr Gran Canaria Local and GCL competition winner, Natalia from La Palma, were guests of Caser Seguros at the Gran Canaria Arena. We plonked our derriéres in the front-row seats, just behind the celebrities at courtside, watching Spain take on Senegal in a pre-FIBA World Cup friendly.

Ask Mr GCL what his favourite sport is and he’ll tell you it’s football. Ask him his second fave and he’ll inform you it’s cricket. We could keep going, but we’d run out of space before we’d discover where he ranks basketball.

Although he was immensely honoured to have been given two complimentary tickets for Spain’s final warm-up game before the 2014 FIBA Basketball World Cup throws (?) off. And joining him in the far-from-cheap seats at the Gran Canaria Arena, home to Club Baloncesto Gran Canaria, was La Palma’s Natalia. For she knew the answer to the following question: At which NBA club did Spain basketball legend Pau Gasol start his Stateside career?

Let’s test your b-ball knowledge. Was it A.) LA Lakers, B.) Memphis Grizzlies or C.) Chicago Bulls? The answer, of course, was Memphis Grizzlies. Here are three random things we learned at the Gran Canaria Arena.

If Pau Gasol ever returns from the US to resettle in Spain, he’ll challenge Barcelona and Spain footballer Andrés Iniesta as the whitest person in Spain. The soccer star’s famously known as El Caballero Palido (The Pale Knight). Milky-complexioned Iniesta’s based in Catalonia, the region from which Gasol hails.

Pau Gasol, joined at the Gran Canaria Arena by darker-hued bro Marc, is the outstanding player of a Spain team tipped to, at the very least, make the final of the forthcoming World Cup. Seeing as they’ve twice picked up silver at the Olympic Games, and they’re competing on home soil. Gasol”s a commanding presence and seems to fill the court, although he has apparently shedded some excess bulk thanks to a weight-loss programme.

Although powerful Pau’s still one of the game’s behemoths. Considering, according to our friends at Wikipedia, he’s seven feet (2.13m) tall and just shy of 18 stone (114kg). And to use football parlance, he’s got quick feet for a big man.

And Gasol’s box office. The majority of the 10,000 crowd, a record for the recently-opened Gran Canaria Arena, were there to cheer on the not-as-big man. And it was difficult not to fall under his spell, his magnetic control something else he shares with Iniesta, it seems.

Spain’s one of the most racist countries in western Europe. And if you need any further evidence, you only have to look at Spanish sport. Where local F-1 fans at the Spanish Grand Prix black up to present themselves as “Hamilton’s family”.

Where the national football team manager can call Thierry Henry “a black shit” and get away with a paltry fine. Where bananas are still hurled in the direction of black players. And where schoolchildren give fascist salutes before a game of indoor football.

Basketball appeared little different. The 2008 Olympic team were mired in controversy after they filmed an advert which saw them narrow the eyes to appear Oriental. Which didn’t go down particuarly well, especially as the Games were held in Beijing.

But, what’s this, Spain now have a black player? And Mr Gran Canaria Local develops a bit of a man crush on Serge Ibaka. Who one minutes breaks up Senegalese attacks with some last-minute blocks before then nonchalantly strolling down the Gran Canaria Arena court, putting the funk into a slamdunk.

3. The importance of the tannoy

Although, Senegal netted (?) first, a sizeable winning margin for Spain was never really in doubt. So the final 88-49 score shocked no-one. And once Spain established a 20-point lead, it felt like as decisive a sporting blow as a k.o in boxing.

Which is why Mr Gran Canaria Local theorized that the tannoy’s used to keep the crowd awake. How else do you explain the random bursts of music that kept the Gran Canaria Arena crowd on their toes? Including Zorba the Greek?

But then this theory was shot to pieces. Marc Gasol, who had previously been more spoiler than creative talent, began to illustrate his ball skills. So entertaining were his tricks, it’s almost as if the Harlem Globetrotters had rolled into town. Even Mr GCL needed to pick his jaw up from the floor.

And as blogger and competition winner leave the Gran Canaria Arena, they do so united. United by having been in the presence of greatness. And although it’s unlikely ever to challenge football and cricket as Mr GCL’s favourite sport, it’s now at least higher up his list.