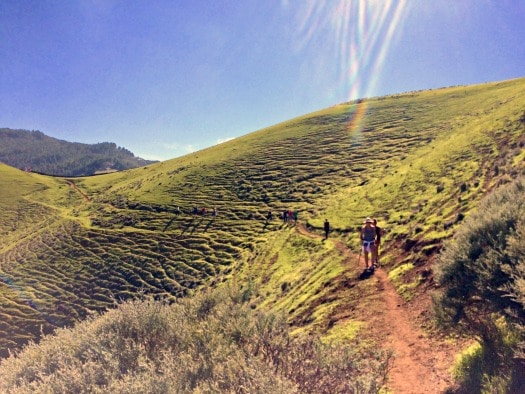 There’s lots to be said about enjoying Gran Canaria horizontally. Reclining on the beach is a popular pastime with both locals and tourists. Yet you need to get vertical to truly discover what the island has to offer.

The fifth Gran Canaria Walking Festival took place from the 5th to the 8th November. And we were lucky enough to be invited. Of the five routes available, we plumped for the Astronomical Night Route.

Staying at El Garañon camp in the heart of the island, we were wonderfully looked after by Gran Canaria Natural and Active‘s Verónica Alemán Díaz. Who introduced us to the new Consejera de Gobierno de Turismo, María Inés Jiménez. We also ran into our old friend from El Caserio de San Jose de Las Vegas, Emma Guerrero Doblas.

Our Astronomical Night Route held on the evening of Saturday 7th November was the fourth in 2015’s Gran Canaria Walking Festival. The Wine & Water Route, however, kicked off the whole event. After picking up participants from Las Palmas de Gran Canaria’s Auditorio Alfredo Kraus, a coach transferred them to the route’s start.

At 1,920 metres above sea level, the Pozo de los Canónigos is one of Gran Canaria’s highest points. It’s a well which was used to capture snow between 1694 and 1896. This was then sold as ice in Las Palmas de Gran Canaria, mirroring a practice in Andalusia.

Walking 7.5km along the Camino de Siete Fuentes (Path of Seven Springs), hikers were treated to some, ahem, pit stops at the island’s leading ecological wineries. The route finished at the Hotel Rural Las Calas in La Lechuza. Where walkers enjoyed an organic lunch.

The next day’s offering appealed to gourmets more than oenophiles. The Cheese Route began in the La Caldera de Pinos de Gáldar, famed for its cloud waterfalls, and culminated in Montaña Alta’s Casa de Queso where trekkers could sample Guía’s famous queso de flor. A cheese not unlike Cornwall’s nettle variety, it’s curdled with the juice of artichoke thistles.

Saturday’s pre-astronomical event was for hardcore hikers, the 14km of the Valley Route being the longest walk on the Gran Canaria Walking Festival’s calendar. Although there was a chance to refuel in the hamlet of San Pedro. A visit to the Finca La Laja enabled participants to indulge in the Valle de Agaete’s famed coffee, tropical fruit, and volcanic wine.

The Gran Canaria Walking Festival concluded the day after the Astronomical Night with the Summit of Gran Canaria Route. Starting from the Garañon, walkers made their way to the iconic Roque Nublo (Clouded Rock). This is one of the best spots on the island to view Spain’s highest peak, the Pico de Teide on neighbouring Tenerife.

Our circular Astronomical Night Route comprised three kilometres of walking and frequent stopping to turn off our torches and look at the unlit sky. We gasped as one as a shooting star burst in and then out of view. “Just a little something we prepared for you,” joked our Vulcan Canarias guides.

The lectures were as light as they were bright. We learned that, contrary to most people’s understanding, the Pole Star is not the most brilliant object in the sky at night. In fact, as it’s a pulsing star when it contracts it’s as if somebody’s flicked the dimmer switch.

As well as observing the stars with our naked eyes, a trio of telescopes had been positioned on El Garañon’s basketball court for us to enjoy a closer look. In the capital and southern resorts, the temperature doesn’t drop too much at night. It does, however, dip in the interior and we welcomed the cups of hot chocolate.

The next morning, we awoke to the sound of woodpeckers going about their daily business in the pines surrounding our cabin. The Spanish refer to these feathered friends rather more poetically than us. With these industrious fellows known as pájaros carpinteros (carpenter birds).

We did take some photos of the Astronomical Night Route. And so did Gran Canaria Natural & Active. However, our star trekking images didn’t come out very well. Clearly, you really need to be there. As we plan to be next year. How about you?

Disclaimer: Ordinarily, a route cost €25 per person (€35 for non-federated members). This price was reduced to €18 for residents and veterans of previous walks. The charge for an overnight stay at El Garañón’s €18 per head. In exchange for a review, we received complimentary hikes and cabin.