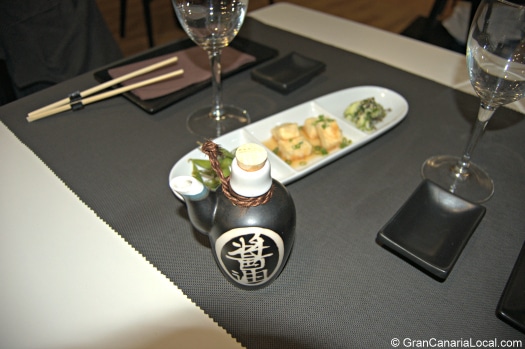 Mr Gran Canaria Local, you may or may not know, is Spain-holiday.com’s man in GC. Back in January, he revealed his top 10 restaurants in Las Palmas de Gran Canaria. Guanarteme’s Hito Restaurante didn’t make the cut. The reason? It only opened earlier this month.

We’re welcomed warmly by co-owner Olga Švandová. It’s a joy to be able to relax, knowing we’re in the hands of experts. For example, when the sushi arrives, Olga informs us that the ginger should be used as a palate cleanser between mouthfuls.

Olga’s partner in climb, for these two will reach great heights, is head chef Oliver Schultz. He’s worked all around the world, and it shows. We loved the dipping sauce made from soya beans, shitake mushrooms, and the wall-to-wall sake. Later, he explains how he got the idea for a chilli and salt crust to accompany the restaurant’s rebel Sakerinha, from a stint in a border-town eatery close to Tijuana.

There are unusual flavour combos going on at Hito. Mojo’s a piquant Canarian sauce which typically sits alongside papas arrugadas, new potatoes boiled in salty water. But, at Hito, they make their mojo with avocado, and if anything it packs more than a punch than guacamole, and serve it with rice crackers.

Disclaimer: Mr and Mrs Gran Canaria Local were treated to a selection of the cuisine available at Hito Restaurante. Mr GCL’s a vegetarian, so we didn’t sample the restaurant’s acclaimed kobe beef. We did enjoy a green-tea sponge cake and sesame ice cream, however. Although, we think it could work just as well, if not better, the other way around. Despite the complimentary dinner, all opinions are our own. How could they be anybody else’s?