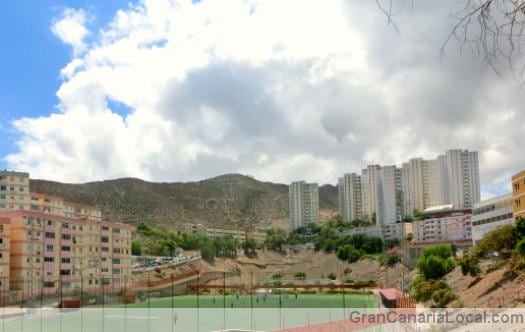 Forget IKEA. I prefer to be in Hoya de la Plata of a weekend. In England, I used to spend every other Saturday in the only place to be: strolling down the Fulham Road. Here, I’d meet my mates, and as the song continues, “have a drink, have a moan and start to think, will there ever be a Blue tomorrow?” For non-Chelsea fans, I’m quoting from the Suggstastic Blue Day. Of course, given the vagaries of the fixtures computer, it wasn’t always every other Saturday. I recall us once having six consecutive away games. Which my wife soon forgot when a Saturday home game followed a midweek one.

In Gran Canaria, I now spend every other Saturday in Hoya de la Plata. As in Silver Ditch. Despite its name, this south-side Las Palmas de Gran Canaria locale’s decidedly less starry than SW7. It does however, as you can see, boast excellent views of the Atlantic. Something not even your cockiest estate agent could claim about a property in the Hammersmith and Fulham area.

Instead of watching the Premiership’s finest strutting their stuff at Stamford Bridge, I’m playing in Gran Canaria’s veteran league. I’m the only guiri (foreigner) in the Hoya de la Plata team. Which, as I’ve explained in numerous radio-show appearances used to promote Going Local in Gran Canaria, has helped me to go local in Gran Canaria. Seeing as I’ve picked up plenty of colloquial, actually make that industrial, Spanish.

I was once given a book with photographs of all the Las Palmas de Gran Canaria football stadiums in as a present. It was actually lent to me but when I tried to return it, I was told I could keep it. The Canarians are like that. Sad statto as I am, I half-joked to my family that they should start producing postcards of the various grounds. So, in the same spirit of giving, here are my takes on a postcard. Print, cut out and keep if you like.