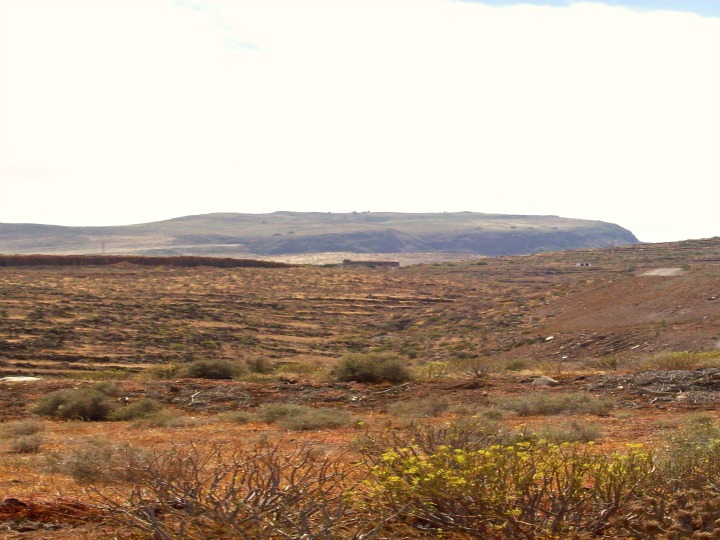 Shooting the colourful landscape of La Berlanga for your visual pleasure, I half-expect Martin Sheen’s Kit to jump out at me, all guns blazing. For the autumnal hue of non-seasonal flora meeting blue, blue sky perfectly matches that of Terrence Malick’s masterly 1973 debut. Which explains why my camerawork is a little hurried, nervy even. If you haven’t seen Badlands, you really should. Rotten Tomatoes give it a mighty 98%.

Kit ends up executed for his killing spree. But this area of Ingenio takes its name from a criminal who got away with his bad deeds scot free. Fernando de Berlanga was a 16th-century tax collector, feared and loathed in equal measure for his crippling tithes. This was Spain at its most feudal.

You’ll find La Berlanga north west of Ingenio, where Fernando de Berlanga once had his lands. Though it’s hardly off the beaten track, well signposted from Ingenio itself, few make it here. So a visit feels even more of an adventure and makes me wish I had my hiking gear with me. I’d like to test my manhood and climb the nearby Monte del Hombre.

On a visit to Reading festival which included a party made up of me, a mate, and his Norwegian girlfriend, a Reading old-timer took the Scandinavian aside. “Love, when you use the portaloo; don’t look down”. Nor should you look down, as in east, at La Berlanga. Otherwise you’ll face an eyesore view of the airport. South, however, offers a glimpse of the twin towers of neighbouring Agüimes’ San Sebastián church.

I’m at a do at La Berlanguilla, a finca belonging to the family of my brother-in-law’s wife, Yolanda. Her father has planted vines here, along with olives. And the home-made red wine which partners our long lunch leads to me enjoying an al-fresco siesta.

Not that I can sleep for long as I’m stirred from my slumbers by the excited cries of one of my nephews who lives in Las Palmas and his Madrid-based cousin. They’ve seen a wild rabbit, apparently for the first time. They really need to get out (of the city) more.