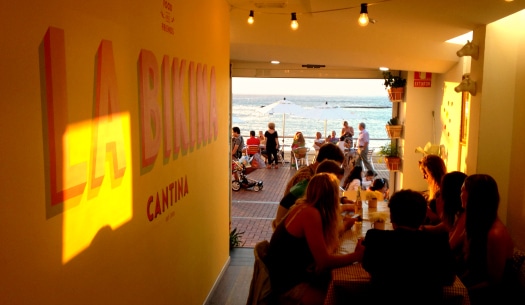 Rain or shine in our home town, and considering it’s the city with the most favourable climate worldwide it’s more the latter, Mr GCL likes to warm up with a little something or other. Especially, if he’s just had a dip in the Atlantic. Making the Paseo de las Canteras’ La Bikina our new favourite restaurant.

We know this spot well. As a veggie, we were regulars at meat-free Bambu, the restaurant predating La Bikina. Except they chose not to have a terrace, an oversight which amazes waitress Ana, who’s kept busy with the outside tables as well as those sitting inside like us.

It’s all a bit of a squash and a squeeze at La Bikina, which, to be frank, only adds to its charm. The cantina”s lack of girth has a knock-on effect on the kitchen. As co-owner Ángel L. Esteban explains, they just don’t have the storage space, meaning a reduced menu and daily trips to the local market.

La Bikina’s a cantina in that there are South-American dishes on the menu. However, one of the cooks, Yan, is Indonesian with an Asian flavour permeating much of their output, including the samosas. It was the spicy manga creation of main cook Ismael which really had us using our forks like weapons though. It was a fight to the bitter end to see who could spear the last morsel. The dessert, prepared hedgehog style, would suit those with a sour as well as a sweet tooth. Yet another La Bikina taste sensation.

Disclaimer: Mr and Mrs Gran Canaria Local enjoyed a complimentary dinner at La Bikina. However, we left a tip in recognition of the excellent service. And the biggest endorsement we can give is we’ll return as paying guests. Now that’s what we call a disclaimer.