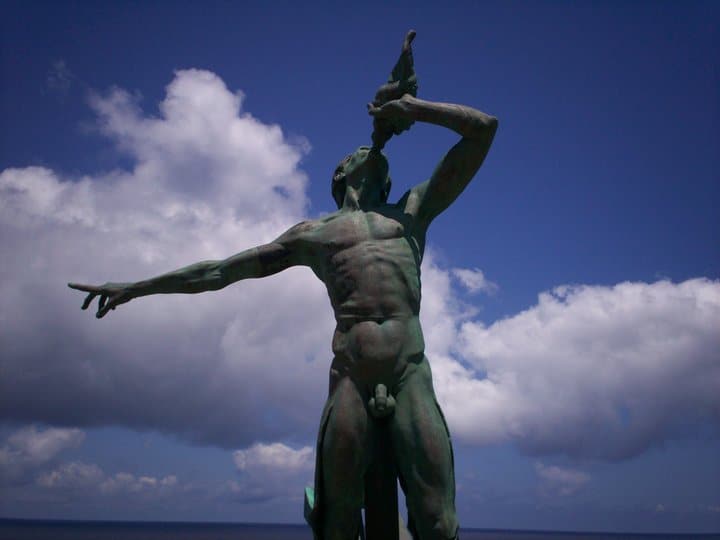 Tener cojones. To have balls is a popular expression in industrial Spanish, translating as to be courageous. Tener cojones grandes. To have big balls is another vernacular saying, meaning to be beyond confident, cocky even. I was reminded of the expression as we made an extended family outing to Playa de La Laja.

If this statue of Tritón is anything to go by, the well-endowed Greek god had balls of steel. You can check out Tri’s impressive torso as you approach Las Palmas from the south on the GC-1. However, Gran Canaria’s possible riposte to Gateshead’s famous Angel of the North sculpture is located below the motorway; making it difficult to really appreciate it.

Better to stop off, as we did, at the car park for LP’s underrated La Laja beach to get up close and personal. There is another parking space for the playa located on the other side of the GC-1. However, this is closer to the more crowded section of La Laja. So, if you want to be as solitary as Tritón, you know where to leave your car.

I’m still teased by my inlaws about the day I was instructed by my wife to enlist my sons and nephews to tidy up our living room. Seeing the cushions on the floor, I confidently declared, “Primero cojones”. What I, of course, should have said was “Primero cojines”. The difference between an i and o can be crucial. As can the use of an a instead of an o. Yes, the classic confusion between polla/pollo.

Officially, Las Palmas has three beaches: Alcaravaneras, Canteras, and La Laja. Although some would say there are five, also including El Confital and San Cristóbal. The first you’re most likely to see, however, is La Laja and it’s well worth a stop.