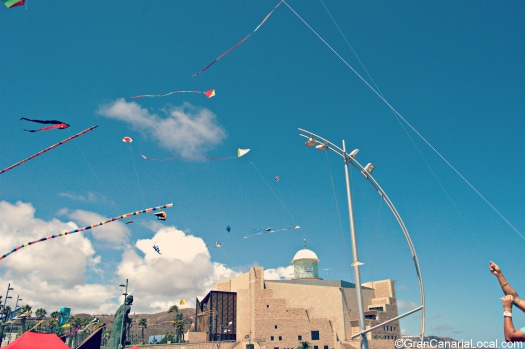 There’s plenty to see and, indeed, do in Las Palmas de Gran Canaria. It is, after all, Spain’s ninth largest city. And the capital of GC, as well as the rest of the eastern Canary Islands.

Unlike bigger metropolises such as Barcelona and London, there’s no Time Out to flick through and use as an events database. However, there are smaller what’s on guides like La Brújula. Which you can pick up at various bars, shops, and tourist information kiosks dotted around the city.

Despite being a self-professed resident expert, however, Mr GCL doesn’t always know what’s going on all the time. He’s stumbled upon cultural goings-on which he’s had no prior knowledge of. Although, the recent Festival de cometas Las Palmas de Gran Canaria was very much on his weekend itinerary.

Which brings us to seven wonderful things to see and do in Las Palmas de Gran Canaria. Whether you’re here on holiday or you’ve relocated, they’ll be right up your calle. So, without any further ado, here’s what we recommend.

Sure, everybody knows the beach is a Canarian kid’s playground. But, whilst it can’t boast anything as grand as London St. James’s Park, Las Palmas de Gran Canaria’s parks are well worth discovering. And they’re all easily reached, by bus, car, or foot.

A typical Sunday will see Mr GCL take GCL Junior to Parque Doramas to check out one of the midday shows. There could be clowns; there could be a fun science show. There are invariably puppets.

As a football-crazy family, we like heading to Parque las Rehoyas. Here there are astro-turf pitches that we can have a kickaround on. Although, bear in mind, you won’t be able to do so if they’re being used for a game or training session.

Mrs GCL prefers a park with a cafe. And Parque Romano‘s her favourite. As it offers seats right next to the playgrounds, so you can relax with a coffee whilst being able to keep a close eye on your kids.

2. Check out the city’s museums

Once upon a time, it wasn’t only kids that went free in Las Palmas de Gran Canaria. For the museums were gratis for adults too. However, museos now all charge an admission fee.

If you’re thinking of visiting more than one museum, buy a LPA Card. It guarantees free entry to 20+attractions in the city.  And you’ll save even more if you purchase this card along with a City Sightseeing Las Palmas de Gran Canaria tour.

To find out more about Christopher Columbus‘ 1492 stopover in the capital, make your way to Vegueta‘s Casa de Cólon. Cólon referring to the Spanish spelling of this famous navigator’s surname. Rather than the House of the Large Intestine.

Over in the other side of town, in Parque Santa Catalina, you’ll find the Museo Elder. This is Las Palmas de Gran Canaria’s science museum. It’s also a great place to hit on a rainy day.

3. Shop until you drop in the capital

Even before you enter Las Palmas de Gran Canaria proper, you’ll see how much Canarians love to shop. As you drive by Centro Comercial Las Terrazas. There’s also a go-kart track here as well as bars and restaurants.

The capital’s most central shopping area, however, is Triana. This area comprises the main Calle Mayor de Triana. Along with streets above and below.

Closer to Las Canteras beach is the Zona Comercial Mesa y López. The Avenida José Mesa y Lopez is home to the two branches of the famous El Corte Inglés. And it’s also a popular place to meet up with friends, particularly in the bars around Plaza de España.

In the west of Las Palmas de Gran Canaria, you’ll find Siete Palmas. As much a commerical development as a residential one, there’s another El Corte Inglés here. Along with a cinema and clothes shops.

For a more authentic souvenir of your time on the island, check out Sunday’s Mercado de Artesania y Cultura de Vegueta. Another end-of-the-week affair can be found in San Lorenzo. As in the Mercado de Agricultor, a farmers’ market.

4. Paint the town red on a night out

Las Palmas de Gran Canaria’s a young city. A popular choice for those  on the Erasmus programme, it’s a great place to experience live music. Like at one of favourite joints, Triana’s The Paper Club.

Over in Vegueta, we’re rather partial to watching a gig at the San Martín Centro de Cultura Contemporánea. Where we saw Fermin Romero. A great introduction to Canarian pop-rock, try and catch him if you can.

At the western end of Las Canteras, you’ll come across La Guarida de Blues. Here, you can watch blues concerts for free just off the Paseo de Canteras. The nearby NYC TAXI Bar offers a similar experience.

5. Hit the beach in LPGC

Although pedants point out that El Confital is part of Las Canteras, there’s coves in between to make it feel like a separate beach in its own right. Less crowded than Canteras, it’s the only playa in the capital which allows nude sunbathing. And whilst the panza de burro (big black cloud resembling a donkey’s belly) covers Canteras in summer, it doesn’t quite reach El Confi.

Moving south, you’ll come across Alcaravaneras beach. It takes its name from the alcaraván (curlew). This migratory bird, much like what appears to be most of northern Europe’s adult population, spends its winter in the Canary Islands.

Staying on the Avenida Maritima, the road becomes the GC-1 connecting big, bad LP with the airport and southern resorts. Opposite the Hospital Insular, you’ll see San Cristobal. More celebrated for a place to eat out in, there’s nonetheless a small beach to visit here.

A little further along the GC-1, you’ll come to La Laja. This is the beach San José favourites C.D. Vegueta Árbol Bonito use for pre-season training. We’ve had a kickaround on it ourselves, with our Hoya de la Plata mates.

Way back last millennium, Mr GCL was a London-based football journalist. He was sent on assignment by Goal to write an article about the Canarian football scene. Which saw him take in a game at the old Estadio Insular.

This side of the millennium, the GCL family are regulars at UD Las Palmas‘ Estadio Gran Canaria, the stadium the club moved to in 2003. Located in Siete Palmas, it was the scene of Unión Deportiva’s dramatic playoff defeat on away goals to Córdoba CF in June 2014. Here’s hoping the boys in yellow achieve automatic promotion to the Primera Liga in 2014-15.

And in breaking news, you might one day see our Dani sporting UD Las Palmas colours. For he’s been invited to spend pre-season with the club. If he impresses in this trial, he’ll be playing for their Cadete team next season.

7. Enjoy a free festival on a LPA Visit

We can’t help it, but we still miss WOMAD Las Palmas de Gran Canaria which was cancelled back in 2012. It was a beautiful celebration of the world’s finest artists playing for free in Parque Santa Catalina. And a great way for MR GCL to brainwash his kids into listening to some quality tunes.

It’s tough to keep track of all the free festivals hosted by the capital. Although we make a decent fist of it on our Gran Canaria Local Community. Pop by regularly for the latest updates.

The plan on Sunday was a simple one. As it was GCL Junior’s fourth birthday, we were going to take him to the XVII Festival de cometas Las Palmas de Gran Canaria. In front of one of the city’s finest landmarks, the Auditorio Alfredo Kraus.

Except Tom contracted chicken pox. So, after his b’day breakfast, he had to stay at home. Whilst Mr GCL took the number 17 bus to its final stop to chronicle the event from a photographic and video angle.