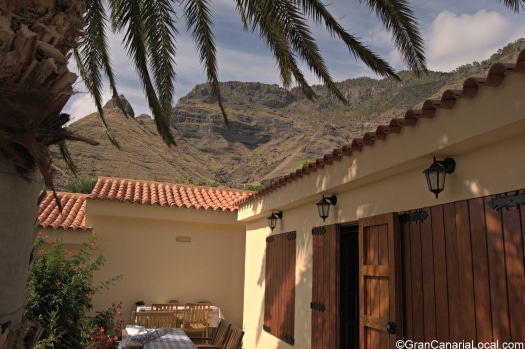 The GC-200, which you’ll need to take to reach Casita Canarias’ Las Rosas in El Risco, is one of the island’s most winding stretches of tarmac. Pack plastic bags if you’re driving with passengers prone to travel sickness. Although you’ll forget all about the rocky road when you reach Las Rosas. Where if the sweet mountain air doesn’t revive you; the grounds’ floral display will.

Get high in Las Rosas

As you can tell from the photos, Las Rosas is well above sea level. There are views of and over the Atlantic, including Teide across the ocean. Although when we visited, Tenerife’s mountain wasn’t doing our favoured snow-peaked impression of Mount Fuji. We stayed in Las Rosas A which accommodates eight. The smaller B’s room enough for three.

By holidaying at Las Rosas, your head’s already in the clouds. You can, however, enjoy an even more elevated position from here. By taking a hike to the likes of Tirma which offers fine vistas over Tamadaba and Risco Faneque. Although, it’s a mere 15 minutes if you opt for a trek to the Charco Azul.

After such exertions, you might want to treat yourselves to some rest and relaxation. There’s a pool which is less a dipping one and more one to actually swim in. We know, fancy that. Then there’s a bookshelf in the lounge with titles in both English and German. Although not as comprehensively stocked as the library at La Asomadita, we manage to locate a good read. Plumping for Peter Carey’s True History of the Kelly Gang over Jimmy Nail’s shockingly well-thumbed autobiography.

Disclaimer: We were treated to a free night’s stay at Las Rosas. Although we defy any paying visitor not to share our positive appraisal. Go on and prove us right.