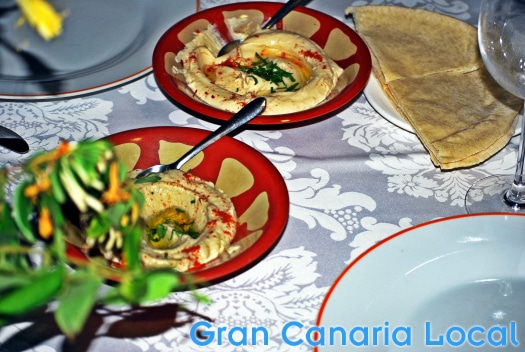 If you’re craving ethnic food on the Canary Islands, then you should make a visit to Las Palmas de Gran Canaria a priority. The archipelago’s most multicultural city houses a wide-ranging number of nationalities. Which is reflected in a broad spectrum of restaurants offering cuisines from locations worldwide, including Los Cedros and its Lebanese menu.

With the exception of Vegueta and Triana, Las Palmas de Gran Canaria feels more like a modern city than one steeped in history. New restaurants come and go here. Making the likes of Los Cedros a veritable institution at the ripe old age of 47.

We’ll show you the way to Los Cedros, named because the cedar’s the Lebanese national emblem. And then tell you what eating and drinking options are available for you there. True to form, our three-part guide is more detailed than on any other blog covering the island.

1. Los Cedros: how to get there

You’ll find Los Cedros just above the Las Canteras promenade, on Calle Martínez de Escobar. After dropping Gran Canaria Local Junior off with abuela, Mr and Mrs GCL walked along the Paseo de Las Canteras. We were lucky that we’d reserved a table as, thanks to it being a Tuesday night before a bank holiday, the evening had a weekend feel about it with most restaurants full.

2. Los Cedros: what to drink

The wine list at Los Cedros includes reds, whites, rosés, sangria, and cava. Mr and Mrs Gran Canaria Local shared a bottle of Viña Sol (D.O Catalunya) priced at 10,50€. Telegraph wine critic Suzy Atkins gushes how its “its crisp, light, fruity style and low alcohol (10.5 per cent) suit hot weather, summer parties and alfresco seafood” which made sense as we enjoy an(other) Indian summer in Gran Canaria with tables as packed outside as in, even at night.

Whilst the healthy dishes might be light, the menu’s rich in choice. There are 15 sections to order from. We let the restaurant’s duena, Linda Jaber Chaar, guide us through them.

And so we started with a portion each of the Hommos and Baba Ganush (both priced at 4,50€). The latter transformed Mr GCL’s least favourite vegetable, the aubergine, into something extremely palatable courtesy of the berenjena being smoked. We followed this with another Lebanese speciality in the form of the Fatush (6,00€), a salad bulked up with fried bread and further seasoned with parsley and sumac.

Next up were some moreish stuffed vine leaves (8,50€). So far, so vegetarian. Omnivore Mrs GCL was then presented with a Kipi frito (1,70€), a meat croquette augmented with onion, pine nuts and spices. Meanwhile, Mr GCL chowed down on Shoarma vegetal (7,50€), curried soya, a true tastebud tantalizer.

We were surprised to conclude the savoury part of the meal with Arroz vegetal (7,50€). This spiced vegetarian rice was no mere accompaniment though, substantial enough to be a standalone dish. We finished with a yogurt (2,90€) which to Mr Gran Canaria Local’s disappoinment, and Mrs Gran Canaria Local’s delight, arrived with a swirl of miel de caña (molasses) rather than mere miel (honey).

Disclaimer: Mr and Mrs Gran Canaria Local were guests of Los Cedros. They did not pay for their meal. A review is the currency we use when visiting Gran Canaria restaurants.