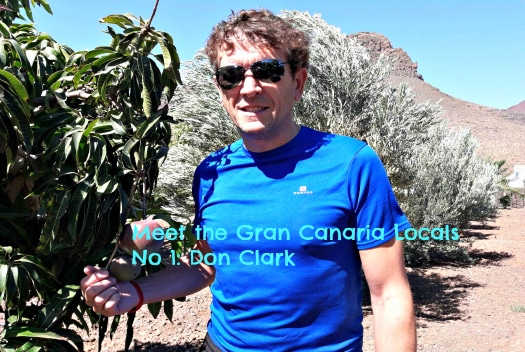 Looking to relocate to Gran Canaria? In the first of a new series, we introduce you to natives and those who have gone local. The first occupant of our hotseat’s Don Clark.

1. ¡Hola, Don! Where are you based on Gran Canaria and what attracted you to this particular area?

We wanted a rural place because my partner, Zena, and I are more at home in the country. She’s a yoga teacher and plans to run retreats here. We found this delightful money pit, I mean finca, near the Crocodile Park in Agüimes, and we’re in the process of renovating it.

We’re only 14 minutes’ drive from the airport. Yet where we live with our family, including Alfie the dog and Tony the turkey, feels so remote. And we have the added bonus of the calls of the park’s parrots and monkeys plus the occasional tiger roar to soothe us to sleep at night!

2. What one tip would you give people relocating to the island?

Get to know more of Gran Canaria than just the tourist zones. There’s a lot to see and do here, and although we all like to sunbathe; doing it 365 days per year is too much for most. Plus, you can get more for your money if you buy in a rustic area.

If I can have a second tip, I’d say to be sure to have a positive outlook on everything. Everything takes longer here, and some locals are quicker than others in realizing that they might have to create work for themselves. You’re bound to hit unforeseen snags, but my advice is to keep going.

3. If you were to liken Gran Canaria to an ice cream, which one would you compare it to and why?

A Feast. You’ll encounter a rocky and hard crust. Persevere, though, and you’ll discover a soft and welcoming centre.

4. What are some of your favourite island hobbies?

I’m a (veteran) hockey player and looking forward to my second season with the UD Taburiente club in Las Palmas. If I can stay injury free, that is. They’re a great bunch, though I don’t yet understand much of the team talks as I’m not fluent in Spanish!

5. Finally, Don, what do you do workwise on Gran Canaria?

I’m chairman of travelmoneyclub.co.uk, which means other people, who are cleverer than me, are running things, but the reality is that I work on it most mornings. I have a little office in a finca outbuilding, but I also have to fly back to the UK for meetings a couple of times per month. Most travellers aren’t aware how much they lose when they exchange Pounds for Euros or another currency.

My experience working in financial services led me to come up with a different approach which can save many people, particularly frequent travellers, a substantial amount. It’s the only service which just works on a club membership basis (maximum fee of £60 PA). Because we receive an annual fee from our members, we don’t need to make a profit from them when they change money.

It’s great for regular travellers to places like Gran Canaria! Bear in mind that the service applies only to UK residents who wish to exchange British Pounds for Euros or other currencies. Readers of Gran Canaria Local can enjoy a special membership discount if they go to this link before 15th August 2017.

Are you a Gran Canaria native? Or have you gone local on the island? If so and you’d like to feature in this series, drop us a line.