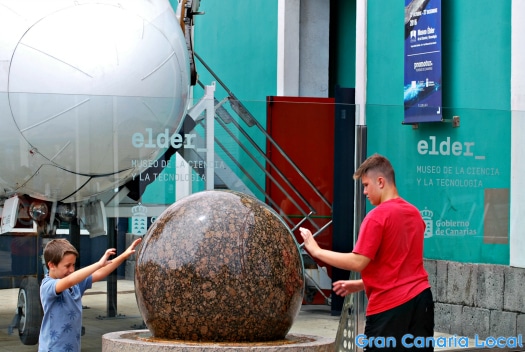 Did you know that we’re the most complete guide to Gran Canaria for both new residents and tourists? Accordingly, we’re invited to review the island’s leading attractions. Such as the Gran Canaria capital’s Museo Elder de la Cienica y la Tecnología.

Las Palmas de Gran Canaria doesn’t have much in common with London’s South Kensington as there’s no tube station for one thing. Nor Natural History Museum either. But the Gran Canaria capital does have its very own Science Museum in Museo Elder. How very SW7.

The museum itself is a mixture of temporary and permanent exhibitions. Fixtures include the ground-floor Arianespace Robocoaster (2€) which teenagers will love for the thrills and spills. But pre-teens might not be coaxed into braving, even with the automaton attraction set on the go-slow programme; preferring to enter a stationary Binter plane instead.

They’ll be even happier at the short-term, second-floor Pequeños Personajes, Grandes Historias display. Aka the History of the World according to LEGO. Which felt like stumbling into a scene from Night at the Museum.

There was an opportunity to learn about the history of grocery shopping on the island. From the days when housewives and children on errands brought goods on credit, ñao, at the local corner shop to the establishment of the Canary Islands’ regional supermarket: Hiperdino. Taking in the arrival of corn from Mexico in the 17th century which led to natives making gofio from this newly-imported cereal along with the pre-existing barley and floor.

You’ll have most fun, however, on the first floor. First by journeying into Outer Space in the Planetarium (2€) which champions the clarity of Canary Islands night skies thanks to low light pollution. Before engaging with the touchy-feely interactive exhibits high in edutainment and low in kids-developing-itchy-feet syndrome.

We were stumped by some of the mental conundrums set by the displays, however. Which included a variation on The Puzzle of the Three Hats and the Lion & Unicorn brainteaser. And left us scratching our heads as to how we could have already solved Einstein’s Puzzle which the great scientist claimed only 2% of the world’s population could.

You’ll find Museo Elder in Parque Santa Catalina. There are numerous yellow Guaguas Municipales lines which stop nearby, including the likes of the 1, 2, and 12. And the Parque’s bus station is convenient too, should you be coming into the Gran Canaria capital on a Global bus.

Museo Elder opened its doors back on the 10th December 1999. You can visit from Tuesday to Sunday between 10:00pm and 8:00am. It’s closed on Mondays.

Disclaimer: We received complimentary tickets. Ordinarily, the admission fee costs €6 which is reduced to €4 for Canary Islands residents and €2 for concessions. Should you wish to contact the museum prior to a visit, you can email them via info@museoelder.es or call on +34 828 011 828.