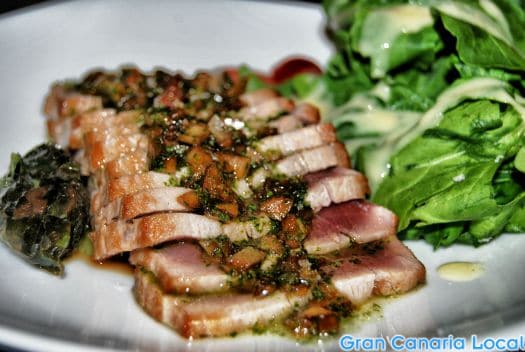 Gran Canaria Local cover the whole of Gran Canaria. However, we’ve very much based in Las Palmas de Gran Canaria. So allow us to show you around our hometown, with a trip to one of the capital’s finest eateries.

We’re talking Nautilo. One of the top 10 Gran Canaria restaurants, no less. Mr and Mrs Gran Canaria Local put on their gladrags and headed out for a night on the town, with a dinner date at Cefalopodo (see what he did there?) Suarez Marin’s joint.

If the nickname(?) hasn’t given you a clue, Nautilo specialize in seafood. With octopus, squid, and cuttlefish dominating the menu. Along with our faithful friend, tuna. Here’s what else you need to know about Nautilo before you go:

1. Veggies, announce your arrival in advance to Nautilo

Mr GCL, as you might have realized, is a hardcore vegetarian. Mrs Gran Canaria Local, as you may be aware, is most definitely not. They’re both cool with each other’s foibles.

Mr Gran Canaria Local’s happy to go along to a fish restaurant, so that his better half can eat to her heart’s content. And the reverse holds true for Mrs Gran Canaria Local. All that Mr GCL asks, however, is for some vegetarian-friendly dishes.

So the writing half of the Gran Canaria Local duo was glad that he let Nautilo know he was veggie beforehand. Mr Gran Canaria Local was rewarded with a heavenly melted cheese starter. And the best carrot cake he’s wolfed down since his Primrose Hill days.

Owner Suarez Marin explains that Nautilo’s low-on-quantity, high-on-quality menu doesn’t contain (m)any vegetarian dishes. But if the kitchen are made aware of a customer’s dietary requirements, they’re happy to adapt. And, boy, did they adapt.

2. Get ready to taste the ocean at Nautilo

You’ll find Nautilo at Calle Covadonga 2, towards the westerly La Cicer end of Las Canteras beach. Follow this street to its logical conclusion and you’ll end up in the Atlantic Ocean. A point not lost on not-so-old Cefalopodo.

There’s a main-course rice dish which, in layman’s speak, is cheese and mushroom. Yet it’s the rich fishy stock which you’ll remember it by. Nautilo have a habit of ramming their influences down your throat.

The highlight for Mrs GCL, however, is the tuna. To Suarez Marin’s delight, she even compares it favourably to the atún she relished at our visit to Restaurante Summum. Whilst according to Mr GCL’s reckoning, it certainly looks a meaty treat.

3. Nautilo rip up the cookbook

“Walk along the front at Las Canteras and you’ll see the same old restaurants offering the same old menus,” reveals Cefalopodo. And it’s true that as you pass from one traditional eatery to the next overlooking Las Palmas de Gran Canaria’s main beach, you won’t see any great variation regarding their signature dishes. Suarez Marin, though, likes to stir it up; punky-reggae style.

Sure, you’ll be able to locate a decent gyoza in Gran Canaria’s capital; in one of the city’s Asian restaurants. Ditto a ceviche; in one of Las Palmas de Gran Canaria’s Peruvian eateries. But you’ll find these ethnic specialities and more side by side at Nautilo, with one common theme uniting them: the ocean.

Nautilo play rebel on the dessert front too. Cefalopodo tells how a trip to Seville inspired him to present dishes in a can. But where the Andalusian capital stuck to serving savoury dishes in a tin, Nautilo take it another level. Now who’s for some canned carrot cake?

Disclaimer: Mr and Mrs Gran Canaria Local enjoyed a free dinner at Nautilo. It was another working meal for the pair of us. If you’d like your restaurant to feature on our blog, drop us a line.