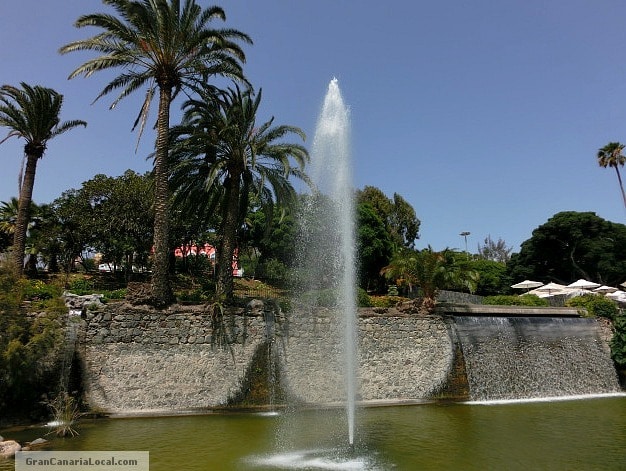 Every weekday, Mr Gran Canaria Local used to answer the buzzer to three nephews and nieces (Hola Carlos, Elena, and Guillermo AKA Timon) off at our Las Palmas de Gran Canaria residence. From 8:10 am to 8:20am, he lead the school run. Mr GCL’s sobrinos joined by his two elder boys, Dani and Alex. Our walk offered an appealing shortcut in the form of Parque Doramas.

Doramas Park’s actually not much of a shortcut. The first features to distract are the cannibalistic fish in the pond. Peer closely enough and you’ll see fish swimming about with strips literally torn off them. So, don’t risk a freebie fish pedicure in Parque Doramas.

We all stand together

Then we’ll have a look at the ranas and listen to their frog chorus. A five-minute Parque Doramas detour becomes ten when the children pleaded to spend some time in the playground. Our record early-morning stay was 20 minutes. After Alex accidentally kicked Timon’s rucksack into the pond. On a Sunday, I returned with Alex and his younger brother, Tom, to take in the free show. This can feature clowns, magicians, puppets, or sometimes a combination of all three.

This green and pleasant land transports you away from the hustle and bustle of Las Palmas de Gran Canaria, Spain’s ninth-largest city. Located to the rear of the five-star Hotel Santa Catalina, it forms part of the plush Ciudad Jardin (Garden City) residential district, designed by the British in the 19th century.

The palm trees pictured provides much-needed shade and its tranquillity is a far cry from the fate suffered by the aboriginal chief from whom the park takes its name. A casualty of the 1481 Battle of Arucas, his head was later displayed on a stick in Las Palmas to deter the native population from resistance. How very medieval.