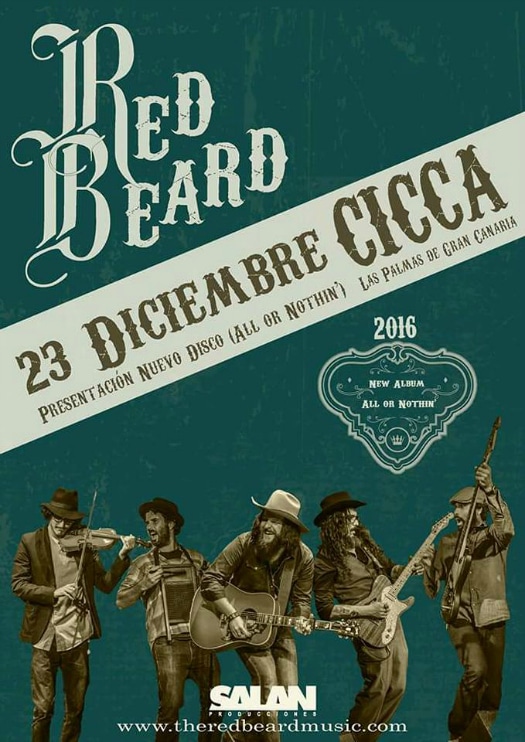 Are you a sucker for live music? You’ve come to the right place. As we’re Gran Canaria’s leading cultural ambassadors, promoting our favourite artists and venues like Red Beard and CICCA.

We’re all about championing local heroes. Now that might be UD Las Palmas. Or it could be the likes of Red Beard and CICCA.

That’s what as in who. Red Beard hail from Las Palmas de Gran Canaria. However, given their bluegrass revivalism which you can dip into on this RNE Radio 3 concert clip, you’d imagine their spiritual home to be Louisville, Kentucky’s major city which has spawned the likes of alt-country legend Bonnie Prince Billy and southern rockers My Morning Jacket.

CICCA is one of our favourite venues. We enjoyed watching our first The Good Company indoor show here, revelling in the intimate setting. Although we still regret missing Andalucian legends Pata Negra play there, especially as some friends enjoyed some last-minute pre-gig refreshment with hard-living frontman Rafael Amador Fernández.

You’ll find CICCA, which was originally a hotel designed by architect Ponce de Léon, in Triana. In fact, it’s just across the road from La Flower. If coming into Las Palmas de Gran Canaria by bus, get off at the Teatro Pérez Galdos stop and you’ll reach CICCA within five minutes on foot.

Red Beard play CICCA on the 23rd December 2016. The concert is set to start at 8:30pm and, at CICCA, they usually begin promptly with latecomers only admitted at the end of a number rather than mid song. Tickets are priced at €15.