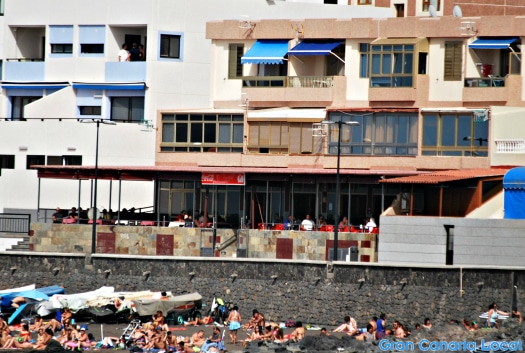 What’s Gran Canaria’s greatest natural resource? The Atlantic Ocean. And so the island’s fish and seafood restaurants offer the freshest produce, such as at Arucas’ Restaurante El Puertillo.

We’ll start off by telling you how to reach Restaurante El Puertillo before explaining their approach to cuisine. Then we’ll introduce you to their drinks list. Concluding with a guide to what sort of dishes you can expect to find on their menu.

1. Restaurante El Puertillo: where it’s at

Restaurante El Puertillo’s a straightforward 13-minute drive from Las Palmas de Gran Canaria along the GC-2, the island’s second motorway which gets considerably closer to the Atlantic than the GC-1. If travelling by bus, take a Global one from the San Telmo station in the direction of Agaete, Arucas (via Bañaderos), or Gáldar. This will add 22 minutes to your journey.

The restaurant takes its name from El Puertillo, the beach belonging to Bañaderos. Which itself owes its title to the fact it was where the canarii princesses used to bathe. In fact, legend has it that during the Spanish conquest of the island in the years 1478-83, Princess Tenesoya Vidina and two of her maidens were kidnapped here by Castilian forces.

If your idea of a Gran Canaria beach is one with sand coloured a yellow the shade of vanilla, El Puertillo’s more ebony-than-ivory tone might come as some surprise. And unlike at the southern resorts where the Atlantic is generally at its most pacific, the ocean is more capricious when you hit the north. Meaning you’ll be able to see, hear, and feel the crashing Atlantic at Restaurante El Puertillo: especially if you’re sitting on its terrace.

This terrace is divided into a bar/café area and a more formal restaurant one where you can make out the triangular Montaña de Guía; a mini-me version of Tenerife’s Teide. Where the former has plastic chairs and tables: the latter’s furniture is strictly wooden. It’s even smarter inside as the restaurant hosts special occasions, such as the first communion of our Dani back in 2010.

The restaurant has been in the hands of the entrepreneurial Hormiga Falcon family since 1986. They are deeply rooted in the area, laying the foundations for the spruced-up maritime promenade which takes you to the natural swimming pools. As well as being the go-to guys if you’re interested in purchasing the new builds on the south side of the GC-2.

This is very much a family business with Santiago Hormiga Falcon a reassuring fixture front of house. With his paintbrush moustache and reading glasses, he cuts quite the avuncular figure. Santiago’s always been respectful of Mr Gran Canaria Local’s vegetarianism which he compares to a religion.

2. Restaurante El Puertillo: what to drink

The restaurant’s wine list is dominated by peninsula vintages which is a bit of a shame considering the vines growing closer to home. On the red-wine front, the cheapest bottle starts at 12€ for gamey Alicante Monastrell. Rising to 20€ for Viña Herminia’s smoked-fruits-of-the-forest 1999 Rioja.

However, if you do want to go local on the alcoholic-beverage front; have at the look at the whites. They include a Manto Malvasía Volcánica Seco from Lanzarote’s La Geria. This 2010 vintage is priced at 19€ and, according to Spanish wine merchants Decántalo, features “aromas of abundant fresh and ripe tropical fruit… among which the hints of pineapple and passion fruit stand out along with very nice notes of peach and citrus.”

3. Restaurante El Puertillo: what to eat

Above all, we recommend Restaurante El Puertillo as a picoteo. As a place to share dishes rather than order individually. Like the champiñones al ajillo (7,90€), mushrooms sizzled in olive oil with garlic that’s fried until it’s almost burnt-toast in colour which brings out the sweetness.

The cerdo frito adobado (8,80€) was devoured by the non-vegetarian 4/5 of the Gran Canaria Local family. This pork had been fried in a delicate olive oil, onion, and red pepper marinade. Resulting in flesh that was fruit-juicy in texture.

Another hit with everyone on the table apart from Mr GCL were the tacos de pescado fritos con mojo de cilantro (8,50€). These battered squares of fish came with crunchy chips and a cleansing coriander salsa. A portion which contained both brain food and a detox.

Mr Gran Canaria Local’s eyes were smiling though when they rolled out the desserts. Mus de chocolate (3,80€) x2 and mus de gofio (3,80€) again x2 graced the table. Although the rich chocolate proved popular, the pewter bowls containing the Berber toasted cornmeal mousse would have been licked clean if we were in rather than out.

Disclaimer: The Gran Canaria Local family were guests of the Hormiga Falcon family. Restaurante El Puertillo is open Tuesday to Saturday from 12:00pm until 11:00pm. On Sundays, you can eat there from midday to 7:00pm.