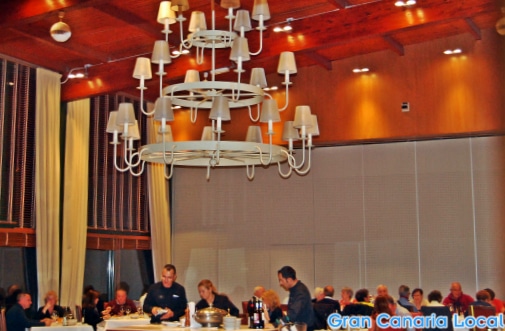 Contrary to what you may have read elsewhere, it’s not that hard to eat out well on Gran Canaria. Especially if you take us up on our tips. These include golden oldies, new openings, and everything else in between.

Mr Gran Canaria Local recently found himself in the heart of the island, in Cruz de Tejeda. As you do. Mr GCL had a dinner date with a rather charming companion. The stunningly-set Parador de Cruz de Tejeda’s Restaurante Marmitia.

A parador, if you didn’t already know, is a luxury state-run hotel. The first one was opened in Ávila, on the Spanish mainland, by Alfonso XIII in 1928 as a way of making Spain more tourist friendly. The hotel chain’s á-la-carte Marmitia restaurants are open to non-guests like Mr Gran Canaria Local. Here’s the skinny on the Cruz de Tejeda branch.

1. Restaurante Marmitia: how to get there

Global run services to the Cruz de Tejeda, but you may well find that you’re stranded if you plan a dinner out. An alternative is to drive there. It will take you just over 45 minutes from capital Las Palmas de Gran Canaria plus an extra half hour from main resort Playa del Inglés.

Yet another option is to walk there. There are a number of hiking trails in the area. Base yourself at one of the nearby holiday homes or hotels for a great way to work up an appetite and then walk off those recently-absorbed carbs. Yet the quickest way to get to Restaurante Marmitia would be to stay in the Parador itself, of course.

2. Restaurante Marmitia: what to drink

Seeing as Mr Gran Canaria Local had been hiking for 12 hours before his dinner, he was in serious need of rehydration. So, he looked first at the range of H2O on the drinks list. Ordering two 3/4 litre bottles of local Teror still mineral water in quick succession (priced at €2,20 each). There was also agua from the peninsula available, from Lanjaron (€2,00 for a 1/2 litre bottle).

Suitably refreshed, Mr GCL turned his attention to the booze. Although tempted by beers such as Andalucia’s Cruzcampo (€2,25 a bottle) alongside local heroes Tropical (€2,50), he opted for a glass of the Parador version of the house red (€3,00). This was the forest-fruity Hijos de Antonio Barceló Tempranillo 2013.

Later, to round off the meal, Mr Gran Canaria Local asked for a cafe especial. He had been told this was the Gran Canaria version of the Tenerife barraquito. But met with a blank look from the waiter, he explained that it was a Tenerife-style coffee he was after. The resulting cup appeared to substitute cinnamon for nutmeg, however.

3. Restaurante Marmitia: what to eat

The concept of the Restaurante Marmitia is to offer the visitor a gateway to local cuisine. And so just like on a wine list which included the semi-dry Fronton de Oro white Mr GCL had recently sampled at Hotel Rural Las Tirajanas, there were island favourites on the food front. Mr Gran Canaria Local ordered from a winter menu (€29,00 for starter, main course, and dessert), although there was an even more specialist traditional Tejeda menu for an extra four Euros.  All dishes were priced individually if you wanted to eat less rather than more.

Veggie Mr GCL had hoped to start with one of the platos emblematicos de Parador (potaje de berros isleño). However, he had to miss out as this particular watercress stew contained flesh as well as flora. And so he plumped for a caldo canario de papas y huevo al cilantro. He relished the warming coriander, egg, and potato stock being poured over additional ingredients such as carrot, corn, and pasta by a superbly attentive waitress.

There were no vegetarian alternatives amongst main courses which included island rabbit stewed in Canarian red wine. Mr Gran Canaria Local indicated that he was happy to have the meat-free pasta starter. His waiter, however, counter-suggested that the kitchen could prepare something off menu. Meaning Mr GCL ended up with a gloriously runny vegetable omelette alongside a tuna-free salad dressed with exquisite Oloestepa from the south of the Spanish mainland. Extra virgin olive oil he’d previously used as a dip for warm freshly-baked rolls.

Desserts, though, were less Andalucian and more Canarian. They featured a torta de bizcochos de Moya (sponge-finger cake) and bienmesabe tejedense con helado. Bienmesabe translates as “it tastes good to me” and this traditionally almond-heavy dessert wasn’t light on the chocolate either. To the extent that Mr Gran Canaria Local wished he had rather further to walk off the accrued calories.

Disclaimer: Mr Gran Canaria Local was invited for an evening meal at the Parador de Cruz de Tejeda’s Restaurante Marmitia by Gran Canaria Natural and Active. All opinions nevertheless remain our own. Dinner’s served from 7:30pm to 10:30pm.