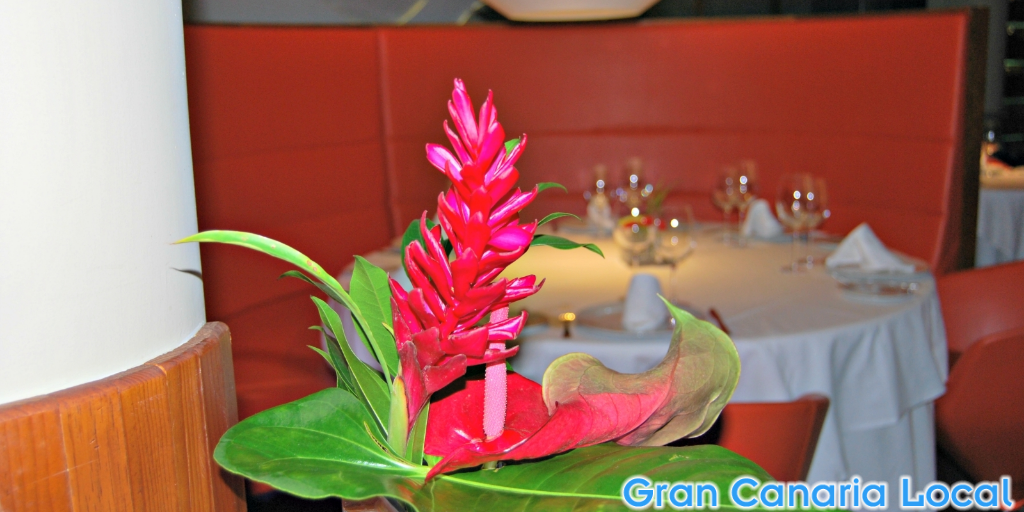 Are you a foodie? At Gran Canaria Local, we profile the island’s finest restaurants. And you’ll certainly need to put your best bib and tucker on if you want to visit the subject of our latest Gran Canaria restaurant review.

In a chance previous encounter, Mr Gran Canaria Local ran into Zoe Food’s Celina, one of the doyennes of vegetarian Gran Canaria. We were in a eatery which will remain unnamed and Mr GCL felt he was being a little picky about (un)said establishment’s failings. “You’re a restaurant critic,” Celina reasoned. “That’s your job.”

Now, Mr Gran Canaria Local’s not going to start comparing himself to Jay Rayner anytime soon. But he’ll take any compliment coming to him. So, wielding his critic’s pen, here’s how he rates Las Palmas de Gran Canaria’s Restaurante Summum:

Mrs GCL’s late for a very important date. She’s been delayed on a tailback on the GC-1. Mr GCL apologizes to manager/sommelier Diego Prados who replies with a smile and a “Don’t worry, we’re open to 12:30am.”

Later the trilingual Prados (fluent in English, German, and Spanish) explains that when people arrive at Restaurante Summum for lunch or dinner, it’s their table for the entire early afternoon/evening. At comida or cena, there’s only ever one seating.

Restaurante Summum opened on the 8th floor of the Hotel Reina Isabel back in October 2013. Formerly, the hotel’s in-house À-la-carte eatery had been the iconic La Parrilla. Yet designers Alfredo Suchomel y Alfredo de Toro have transformed the space into an extension of the Las Canteras beach which the restaurant overlooks.

So the orange swivel chairs on which diners sit represent the coral. The blue carpet, complete with waves, symbolizes the Atlantic ocean. Whilst the waiters are kitted out in brown aprons, trousers, and loafers, so as to resemble the sand.

A word or two on the staff. The waiters are visible, but avoid invading your personal space by being too in your face. And Prados oversees everything by readily sharing his expertise, gently guiding Mrs Gran Canaria Local through the choppy waters of her own indecision.

Mr Gran Canaria Local had previously taken fusion cuisine to be a child of the 1990s. Along with New Labour and Bop It. Until Restaurante Summum’s Diego Prados explains that it dates back to the mid 19th century onwards.

The menu at Restaurante Summum’s international in scope but specializes in Peruvian cuisine. In the mid 1800s, Chinese and Japanese labourers emigrated in great numbers to the South American country; to work on cotton and sugar plantations. With them, they brought new ideas; particularly in the kitchen.

Certainly, there were already similiarities. Ceviche, as any fule should know, is fish raw like sashimi; cured rather than cooked in lime juice. Priced at €22, it’s the most expensive item amongst Restaurante Summum’s entreés. But the Asian influence perhaps explains why Mrs Gran Canaria Local’s starter of foie gras arrives delicately encased in a giant wonton and her main course of beautifully-seared tender red tuna comes with a crust of sesame seeds. Mrs GCL’s less taken by the basmati rice which accompanies her main, however. As she finds it rather bland.

As a vegetarian, Mr Gran Canaria Local doesn’t go hungry. Especially as the portions are non-nouvelle-cuisine-sized large. Whilst the broccoli of his starter’s a little too al dente for him, he understands that it’s a tricky vegetable for the kitchen as over-boiling results in the broccoli breaking up. Later, Mr GCL’s main course of vegetable risotto turns out to be as creamy as anything served up in Lombardy, despite using Valencian paella rice rather than arborio.

3. Saying it with roses doesn’t have to be a cliché

For dessert, Mrs Gran Canaria Local plumps for a pudding Prados describes as a mad idea that has become a favourite with Restaurante Summum’s public. It’s one where rose permeates the whole plate, to the extent an edible petal adorns this culinary masterpiece.

Mr Gran Canaria Local’s postre’s no less inventive. Instead of rose, it’s Pedro Ximénez which suffuses everything; from a shot of the dessert sherry to PX-flavoured ice-cream to pears stewed in sherry. All in all, it’s a perfect end to a near-perfect meal.