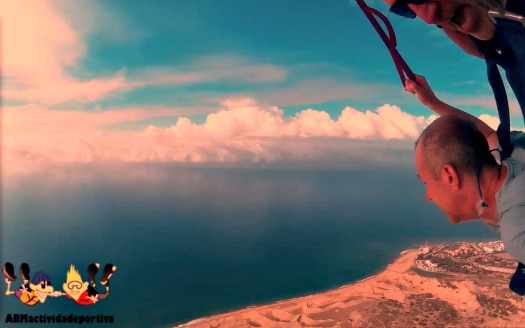 Our Adventure Gran Canaria series began with a Sardina del Norte dive. It continues as we swop being, hyperbole alert, 20,000 leagues under the sea to, no exaggeration necessary, 10,000 feet (3,000 metres) up in the air. If you fancy skydiving in Gran Canaria, we’ve done the air miles.

Mr Gran Canaria Local doesn’t have a head for heights. His school trips to the Peak District in the East Midlands led to vertigo. But Mr GCL’s of the school of thought that if you don’t confront your fears, you’ll only live life to the (half) full.

So, he opted to take a leap of faith. By tandem jumping with Paraclub de Gran Canaria. Here are three things Mr Gran Canaria learnt about skydiving in Gran Canaria:

1. Bananas are not only for eating on Gran Canaria

Before Mr Gran Canaria Local’s skydiving in Gran Canaria adventure could begin, Paraclub de Gran Canaria’s Frank talked him, and fellow rookie Michaela, through it. Theory before practice and all that. The father of a family who were jumping after Mr GCL and Micky was used to demonstrate the poses your novice skydiver has to strike.

So, Frank had the dad perched on his knee like a ventriloquist’s dummy. Before encouraging him to do the banana in shaping his body like said fruit whilst free falling, to avoid meatbombing which is as gruesome as it sounds. And then lifting his knees up high to prepare for landing.

Paraclub de Gran Canaria operate out of Aeródromo El Berriel. This aerodrome is in Gran Canaria’s south east, close to the resort of Bahía Feliz. We lost sight of our small, seatless plane whilst the pilot warmed up its engines out of earshot of guests at the nearby hotels.

2. In a battle between head and stomach, stomach wins

It’s a round trip that we take from Aerodrómo El Berriel to the dropzone above Playa del Inglés. Being in the air for 20 minutes on a mainly circuitous route can play havoc with your tummy. Michaela was paired with Frank whilst Mr Gran Canaria Local’s instructor was Aurelio, reassuringly making tandem skydive number 2,693.

Being reminded of the postures we have to adopt focused our minds. Before looking at glacier-like clouds relaxed us. But when we’re told our skydiving in Gran Canaria adventure’s set to start, the dawning realization we’re to leave our tiny plane tied our stomachs up into impossible knots.

When Mr GCL watches the video of his skydive, he has to look away. At the same point each time. And that point is 54 seconds when Michaela exits the plane and Mr Gran Canaria Local has a flashback to that fleeting moment of panic of being the one next to go.

The 35 seconds of free falling which follow are easily the most thrilling of Mr GCL’s life. Then Aurelio applied the hand brake by opening the parachute. It’s here where Mr Gran Canaria Local’s tummy played up again as he faced seven minutes of appreciating how far above the ground he was.

But Mr GCL enjoyed steering the parachute. Aurelio took charge for the landing, however. With Playa del Inglés’ welcoming carpet of sand perfectly breaking the fall. And that’s our skydiving in Gran Canaria story. The tallest tale we’ve ever told.

Disclaimer: Our tandem skydive with Paraclub de Gran Canaria cost €290 with photos and videos. As Typical Non Spanish members, Caser covered all our expenses. Stand by for our next adventure.