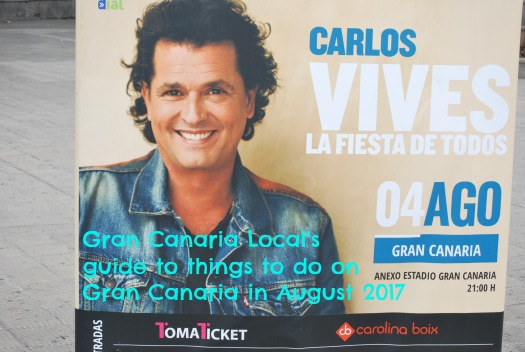 Will you be on our beautiful island this month? If so, our topical things to do on Gran Canaria in August 2017 will come in handy. Our monthly guide has plenty of recommendations so you’re never at a loss for something to do.

Unfortunately, we can’t include all the things to do on Gran Canaria in August 2017. But we’ve focused on listing the very best ones/our favourites. Whether you’re in/heading to the north, south, east, west, or, indeed, centre of the island.

The capital hosts the majority of things to do on Gran Canaria in August 2017. As the Festival Mar Abierto continues with a show from one of Colombia’s premier exports, Carlos Vives, whose duet with compatriot Shakira was last year’s Despacito in the States, if not the UK. TomaTickets have seats from 30€ for this Anexo Estadio Gran Canaria concert on Friday 4th August.

If you’re more into hard rock and cerebral metal than Latin pop, there’s an alternative gig to go to. In the form of Heltemot and Blackbird at Las Palmas de Gran Canaria’s PKDK Pub Tattoo. Admission is free and doors open at 10:30pm.

The very next night, it’s the turn of Siete Palmas’ Gran Canaria Arena to provide the venue for Melendi. Discover what all the fuss is about one of Spain’s hottest artists. Yes, that’s right, Saturday 5th August is another date for your diary.

Even further out, in the big, bad city’s most remote outskirts, the Fiestas de San Lorenzo go on until Tuesday 15th. Highlights include a romería on Saturday 5th from 6:00pm, a religious procession which is not at all solemn with harvest-festival-style floats handing out free food. The Fuegos de San Lorenzo on Thursday 10th is one of the island’s best and biggest fireworks display.

As August passes into September, visit Parque Santa Catalina for Cine+Food. This year’s edition starts on Thursday 31st and continues until Sunday 3rd September. Drink and eat your way around the world whilst you watch some old and new(er) favourites on the big screen (dubbed into Spanish).

Las Palmas de Gran Canaria can feel a little dead on a Sunday as the majority of shops close. Except for the first domingo of the month when Triana opens for business. The programme on the 6th August includes a show from one of our favourite children’s entertainers on the island, Rafaelillo Clown Cabaret, in Plaza Cairasco between midday and 1:00pm.

The capital’s premier beach, Las Canteras, never fails to bustle. La Guarida del Blues has four Thursday jazz jam sessions (each one starts at 9:30pm) to look forward to. Culminating with the 28th’s performance of a trio led by the one and only Mingo Roque on piano and bass.

At the other end of the GC-2 to Las Palmas de Gran Canaria, Agaete‘s Fiestas de Las Nieves continue until Sunday 27th August. The highlight of this sacred and secular combo is undoubtedly Friday 4th’s Bajada de La Rama. Where locals descend from the Tamadaba massif above El Valle de Agaete carrying pine branches which they eventually soundly thrash the Atlantic with, at Puerto de las Nieves, mimicking the canarii (the pre-Spanish Berbers who used to inhabit what they called Tamarán) who did this as part of a let-it-rain ceremony.

Later in the month, as in Thursday 17th to Sunday 20th, BioAgaete Cultural Solidario takes over the streets of Puerto de las Nieves. The island’s premier world-music festival offers the chance for you to see 50 acts for free. Such as the breezy acoustic soundscapes produced by La Cuerda Floja.

In Arucas, a jolly old time’s guaranteed at FiestoRon 2017 on the nights of Friday 10th and Saturday 11th. You can buy one or two-night passes in store at Rocasa outlets or online at entrées.es. There will be mojito stalls and music from the likes of Asturias’ answer to Oysterband, Celtas Cortos, and scatalogical rock veterans Mojinos Escozios on the Friday; and performances from, among others, M Clan influenced more by Mississippi Southern rock than their Murcia birthplace, and funky punks Seguridad Social on the Saturday.

In Firgas, August sees the municipality celebrate its main event of the year. The Fiestas de San Roque 2017 start on Saturday 4th and end on Friday 25th. They even paint the date of each year’s festivities on the conveniently white town hall.

Meanwhile, in Gáldar, the Iglesia de Santiago de los Caballeros welcomes the visit of Arganda del Rey’s Banda Municipal Joaquín Turina on Thursday 3rd, at 8:00pm. Expect to hear international numbers from the likes of Benny Goodman and Frank Sinatra as well as Spanish ones. The concert recognizes the 150th anniversary of the birth of the Banda Municipal de Música de la Real Ciudad de Gáldar.

Over in Teror, The Funamviolistas drag classical music kicking and screaming into the 21st century. This is very much a frolicking take on the genre. They play the Auditorio de Teror on Thursday 31st and tickets are available at 10€.

In Mogán, there’s the very first Feria de Atún de Mogán from Thursday 3rd to Sunday 6th. Arguineguín holds a food fair encouraging people to consume tuna fresh from being caught off its shores rather from straight out of a can. Leading chefs on the island such as Juan Santiago Fuentes, Thomas Leeb, Nicola Poltronieri, and Davidoff Lugo will be on hand to show you exciting new ways to prepare a fish that may have become overfamiliar with many.

For an intense musical experience, head to Cita Shopping Center’s Sala La Choza. Sweat will be dripping off the ceiling at a venue which will get packed for the likes of Demian Band on Thursday 17th (3€ with complimentary half pint). They’ll also be turning the speakers up to 11 for Subversia on Friday 25th who present their new All In album (3€ without free beer).

In neighbouring Maspalomas, the Parque Urban del Sur’s free Maspalomas Music Festival (look out for Atelier’s cocktail truck) takes place from Friday 11th to Sunday 13th. An eclectic line-up sees slots from such talents as Argentina’s folktronic La Yegros and dubby Dutch Skip&Die on Friday and the homegrown musical theatre of Mondo Diávolo and sweet soul of France’s Gaspard Royant on Saturday. Rhyming local loverman Aniba and orchestral maneouvres in the light from the Spanish mainland’s Mastretta complete the bill on Sunday.

Also in Maspalomas, it’s free admission at the X Feria de Artesanía Faro de Maspalomas. Fedac, the official government body, are putting on this craft fair. Head to the lighthouse from Friday 11th to Sunday 20th between 5.00pm and 11.00pm to pick up some souvenirs/pressies.

Next door in Meloneras, Karen Méndez, who’s progressed from covering reggaeton hits to become one of the emerging original voices of her generation, plays ExpoMeloneras on Friday 11th. This show is part of the Summer Nights by Heineken series. Entradas.com are selling tickets from 11€.

And great rival Ingenio doesn’t shy away from the partying in August either. As Carrizal enjoys 16 days of festivities. The Fiestas de Nuestra Señora del Buen Suceso y San Roque commence on Friday 4th and conclude on Sunday 20th.

Artenara‘s Fiestas en Honor a La Virgen de La Cuevita span nearly the entire month of August. There are both sacred and secular events from Tuesday 1st to Monday 28th. The virgin is the patron saint of both Gran Canaria cyclists and folk musicians.

Way out west, visit La Aldea de San Nicolás on the weekend of the 5th and 6th for XII Slalom Automovilístico La Aldea 2017. 30 racing cars hare around a 5km circuit prepared for the event in the municipal ravine. It’s fun for all the family and free.

The oldest fiesta in Santa Brígida takes place on Sunday 6th. It dates back to the 16th century when municipality founder Isabel Guerra made it a condition of her will for locals to celebrate a feast in honor of the saint, after building the first chapel. The considerably newer romería, held since 1957, sees floats decked out with traditional motifs.

Tejeda’s Fiestas del Socorro kick off on Saturday 26th, and true to form regarding Canarian celebrations, they continue until the next month. Held in honour of the Virgin del Socorro, the municipality’s patron saint, they follow the template. With offerings of seasonal products made to her and her image paraded in a procession.