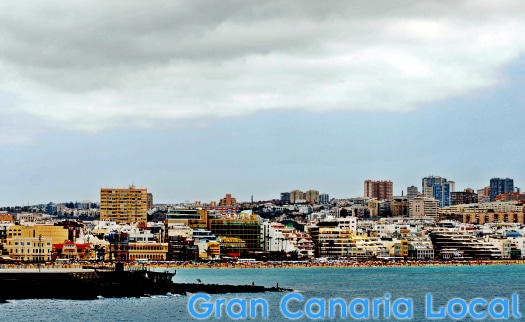 Off to Las Palmas de Gran Canaria? A visit to the Gran Canaria capital isn’t complete without checking out one of the world’s premier urban beaches. The one and only Playa de Las Canteras.

There are five beaches in Las Palmas de Gran Canaria. If you only have time to visit one, make it Playa de Las Canteras. Discover why in our six-part guide.

1. Hit the beach at Las Canteras

If we take La Cicer as the start of Las Canteras beach and La Puntilla as the end, although technically it continues to La Isleta’s El Confital, the playa goes in a diagonal south-west to north-east line. Walking along the promenade would take you a leisurely 40 minutes. It is 3.2 km, after all.

But get off the prom and onto the beach. Playa de Las Canteras is split into five sections. La Cicer, which is located out of the reach of the beach’s reef, is perfect for surfing. Indeed, Mr Gran Canaria Local learned to surf here with Oceanside.

Next up is La Peña de La Vieja which is a firm favourite with families. Then we come to Playa Chica where you can practically walk across to the reef, tide permitting. Join the teenagers getting the kicks by jumping into the Atlantic the other side of the reef in a spot known as El Ascensor (The Lift) as the ocean brings you back up to your launch-off point.

Then you reach Playa Grande, which (if you hadn’t guessed from its name) is the longest stretch of the beach. Mr GCL enjoyed a SUP here with Mojosurf Canarias. And finally we have La Puntilla, another great watersports base with Mr Gran Canaria Local having tried his hand at snorkelling with a sea scooter here.

2. Indulge your tastebuds at Las Canteras

Go to a Chinese restaurant in London’s Chinatown and order seaweed. You’ll end up with cabbage. That’s not the case in Las Palmas de Gran Canaria’s Chinese restaurants who source this menu staple from Las Canteras beach.

Other fruits of the sea can be enjoyed at La Cicer’s Ñoño El Chico who have been serving their classic squid and alioli roll (bocadillo de calamares y alioli) since opening back in 1980. Rather more vegetarian friendly is Naturalïs Beach Bar, just around the corner. Another recommended eatery above this stretch of Las Canteras sand is Bandidos Beach Bar who specialize in the most gourmet of burgers.

The Paseo de Las Canteras next leads to La Peña de La Vieja, home to La Bikina who don’t so much blend the cuisines of Latin America and South-East Asia as offer them a 50-50 share on the menu. More ethnic flavours can be found at Bar Restaurante Los Cedros, a haven for Lebanese food lovers from 1969 onwards. Even more established in the area is ice-cream parlour Helados Peña La Vieja which dates back to 1936, although ice-cream sellers traverse the sands of Las Canteras; along with hawkers of barquillo, a wafer-like biscuit.

This area is a great place to try some tapas, not least at Playa Chica’s Las Marujas who score a very respectable 4.5/5 on Tripadvisor. Moving on to Playa Grande, where you should sample the Peruvian cuisine at Hotel Reina Isabel’s á-la-carte Restaurante Summum. There’s another temple to Andean food a little further along the Paseo, at Aji, Limón y Canela.

La Puntilla has two great places to eat in the neighbouring La Macarena, which teases your palate, and the more traditional La Oliva who serve English breakfasts in the am and classic Canarian fare in the pm. Restaurante La Marinera in Calle Alonso Ojeda is where Las Palmas de Gran Canaria’s wealthy set like to lunch and dine on fresh fish and seafood. Five minutes on foot away, there’s a cheaper option on the pescado-fresco front in Amigo Camilo on Calle Caleta.

3. Look after your body at Las Canteras

Apart from the obvious fitness option of a run and a swim on the beach which is also the perfect playground for tennis and volleyball, there’s the GO fit gym on Calle Secretario Padilla just behind the oceanfront Numancia. Power Yoga Canarias runs yoga classes on the beach from July to September whilst Pure Yoga Canarias offer an intensive Vinyasa Yoga programme. If you’re looking more for a treatment than a workout, check out the likes of Talasoterapia Las Canteras in Calle Padre Cueto and Ristta Thai Wellness on Calle Sagasta.

4. Make a night of it at Las Canteras

Las Canteras was the first stop on our perfect night out in Las Palmas de Gran Canaria. It could well have been our last stop if we’d continued to some of our favourite venues such as Mumbai Sunset, Mojo Club, and Sala Nasdaq. You just can’t beat live music on Las Canteras, if you follow the Ruta Playa Viva; stopping off to see bands play at member establishments which include La Guarida del Blues and NYC Taxi Bar.

Then there’s the Auditorio Alfredo Kraus famous for its classical music concerts but which hosts the odd rock gig too. Look out for the Medusa sculpted out of bronze and steel by local artist Juan Bordes, set to petrify the Atlantic in front of her. Except her eyes remain lowered, which means the Las Canteras waves remain safe from her glare.

Nearby, you’ll find a statue of the great tenor himself, Alfredo Kraus. Looking like a Merman, he appears to have ascended from the depths of the ocean. It’s the auditorium named after him that dominates Canteras beach’s skyline however.

Behind the Auditorio Alfredo Kraus, there’s one of Las Palmas de Gran Canaria’s major shopping centres in CC Las Arenas. Walk along the Paseo for novelty momentos at La Tienda De Las Curiosidades and more stylish souvenirs at Las Canteras LifeStyle including beachwear to look the part on the playa. Running behind Calle Sagasta, Calle Albareda’s home to Mercado del Puerto which these days is as much a place to eat and drink (try Woodies Kitchen for the tastiest pizzas in town) as to pick up your fruit and veg for the week.

If you’re travelling on a budget, there are apartments you can book such as the Apartamentos Brisamar Canteras and Moana Suites. As well as hostels including Big Fish Las Palmas and La Ventana Azul Surfhostel. Although we can imagine after reading this, you might want to relocate here on a more permanent basis. We suggest checking out the properties at Canteras Real Estate if so.