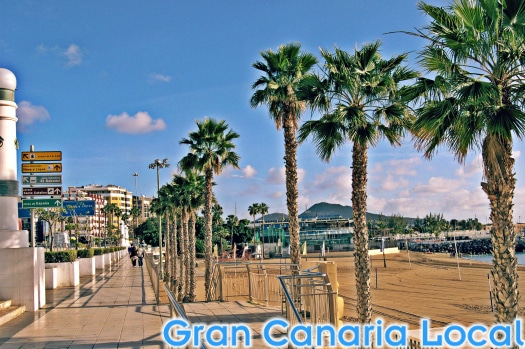 What’s the subject of our latest essential guide? Only the capital’s Alcaravaneras. Allow us to introduce you to one of our fave Las Palmas de Gran Canaria neighbourhoods.

Alcaravaneras is a barrio we’ve given serious consideration to relocating to and, who knows, we might still move there one day. Sandwiched by the tunnel which transports motorists to the GC-2 north-coast road and Mesa y López, it’s one of the capital’s liveliest areas. Learn more in our four-part guide.

Alcaravaneras was the first football team Mr Gran Canaria Local played for on the island. Not that his team’s pitch was the beach, mind. The club’s connection to the area stemmed from the fact that the original post-match watering hole was Restaurante Alemania in Calle Barcelona, the very epicentre of this buzzing district.

One of our favourite streets in the GC capital’s Calle General Mas de Gaminde. Here you’ll find veggie-friendly restaurants in Pizza Real and the Lebanese El Coto Libanés, along with the most clued-up DJs in the area at late-night bar/club HoocK. For a fine-dining option, we advise you to go to Ingeniero Salinas’ El Equilibrista.

Or savour wine and tuck into tapas at nearby 20conmigo. If you’re craving sashimi and sushi, head to Calle Barcelona’s Restaurante Kyoto. And if you’ve got a sweet tooth, you’ll appreciate that you can get your sugar fix every day of the week at La Trastienda Fabrica de Sabores.

Mr Gran Canaria Local’s current fitness routine is to run from his Arenales base to Alcaraveneras. He then jumps in the ocean from the wooden boardwalk (dependent on tide) and swims the 550 metres of coastline. Before jogging back to his towel for a well-deserved siesta.

Mr GCL also gets a workout participating in a game of two-a-side football with his three sons on Alcaravaneras beach. Although only mad dogs and Englishmen play in the midday sun. When the sand takes on the property of hot coal.

The boys also come here as part of their pre-season training with their coaches keen to build up the ankles and thighs of the future Silvas and Valeróns, a natural result of running on sand apparently. Former Chelsea manager John Neal was a fellow advocate of such honing and toning, taking his first-team squad to use Aberystwyth beach. Alcaravenaras though shades this Welsh resort as training’s rarely rained off here.

The absence of waves on Alcaravaneras makes it a popular destination for families with younger children. It’s also ideal to learn canoeing and kayaking at the likes of Club Amigos del Piragüismo. The neighbouring Aula Universitaria de Piragüismo also offer classes in SUP.

It’s not difficult to go green in Alcaravaneras. Especially if you visit the Mercado Central. Dating back to 1863, it’s a great place to pick up the freshest fish, fruit and vegetables.

Then there’s La Zanahoria Bioglobal SL. One of this healthfood shop’s two branches is on the same street as the Mercado Central. Calle Galicia 19, to be precise.

Local 4, Calle Presidente Alvear 9’s where you’ll find Sibarita Pasta Artesanal. Whether it’s freshly-prepared pasta dishes you want to take away or craft pasta to cook yourself, this is Las Palmas de Gran Canaria’s best Italian deli. Their sauces are great timesavers in the kitchen too.

What with its highly-regarded schools, Alcaravaneras is a popular place for families making the move to Las Palmas de Gran Canaria as well as digital nomads who operate from a convenient CoWorking Canarias base. Slap blang opposite Mercado Central, La Casita de Laura offers the opportunity to live in a Spanish academy. Another short-term accommodation option is backpackers’ fave, Hostel Alcaravaneras.