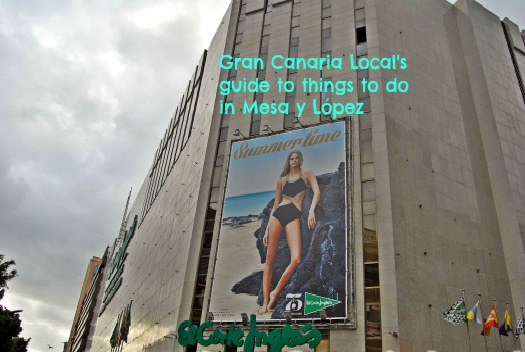 We’re committed to offering the most comprehensive overview of island life. Yes, our rep as the most granular Gran Canaria guide is something we very much wish to preserve. With that in mind, we’ve updated our area overview of Las Palmas de Gran Canaria’s Mesa y López.

Avenida José Mesa y López is the avenue from which this area in the Gran Canaria capital takes its name and is best reached by the yellow municipal 1, 2, 17 and 25 buses. José Mesa y López (1877-1951) was a famed Canarian lawyer/politician. But enough of the history, here’s our four-part guide to what you can do in the area in the 21st century.

The bars around the iconic Plaza España are popular venues to start the weekend. With the likes of Terraza Géiser also ideal for football fans wanting to catch the action on the big screen. So, a great urban base to follow fixtures national and international.

Plaza España’s also known as Plaza de la Victoria. It’s where fans and players of UD Las Palmas congregate after an important victory. The last time this happened was in June 2015 after the local heroes returned to the Primera Liga for the first time in 13 years.

The avenida used to resemble London’s Finchley Road, a not-so attractive main thoroughfare. Then city bods built a cycling path and made the whole area more pedestrianized. So, the avenue now feels more like Barcelona’s La Rambla and hosts regular events in its tree-lined boulevard.

Mesa y López is home to some of our fave restaurants in Las Palmas de Gran Canaria. Many of which we’ve reviewed. Such as the place to enjoy a coffee on the slow, Café Regina. Then there’s the anti-Angus Steakhouse El Churrasco which sources their produce from Argentina’s Las Pampas rather more meticulously than the London tourist trap.

Along with the first branch of gourmet burger chain, 200 Gramos. Also worth a shout out is the ecologically-sound, one-part delicious to one-part nutritious, Cokí tucked away off the main drag. Nearby, Restaurante El Pote goes big on Spanish staples whilst Restaurante Ribera del Rio Miño excels in Galician gastronomy.

Not forgetting Monóculo who elevate plating to an art form. Elsewhere, Olof Palme’s Mesón El Campechano transport you to Andalusia with classic southern Spanish dishes of the ilk of the gazpacho-like salmorejo. Elsewhere, the cuisine’s more Canarian at the sancocho specialists: La Bodeguilla.

The Ruíz de Alda terrace of La Chascada Gastrobar is the perfect place to enjoy a refreshing glass of vermouth and/or burgers which include a Spanish omelette one. Juan Manuel Durán González’s La Traviatta features in our good pizza guide. Last, but no means, least Plaza España’s Mas Da Che, owned by one of Gran Canaria’s most famous footballing sons in Vitolo, does sensational scrambled eggs amongst many other things.

Nothing dominates the Mesa y López skyline quite like the twin towers of El Corte Inglés. Spain’s main department store has two branches facing each other. Travelling up from the Avenida Marítima, visit the one on the right for its cafe, clothing, restaurant, and supermarket. The one on the left, meanwhile, sells books, CDs, and white goods.

As Las Palmas de Gran Canaria’s second commercial district after Calle Mayor de Triana, there are more high-street shops to look out for on Mesa y López. These include über-trendy Guess and Leeds’ finest Marks & Spencer. As well as a branch of Zara for men and women.

If you’re looking for an individual boutique, head to El Cuartito Azorín. Jugueterías Nikki is a handy stop to pick up a present for a child’s birthday. And vegetarians and vegans will adore Calle Galicia’s La Zanahoria for their organic fruit and veg, takeway food and tofu.

Mesa y López is primarily a residential district. There’s only one hotel in the area, Hotel THe Fataga. Although offering a city-centre base, Fataga primarily targets MICE tourists, what with its business centre.

You will also find the odd holiday apartment. In a built-up area that’s still only five minutes away from Las Canteras beach on foot. Search databases such as Airbnb to find listings for you and your family’s vacation.

Most Mesa y López accommodation, however, if of the longer-stay variety. Agents covering the area range from the likes of Canary House Real Estate to RE/MAX White. Although we strongly recommend you do some legwork and walk around the area to spot for-sale and for-rent signs.