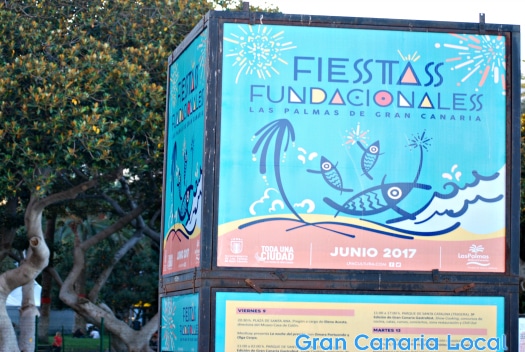 Will you be on our beautiful island this month? We share our top tips on topical things to do on Gran Canaria in June 2017. Stand by for a mega post with a host of expert recommendations.

Obviously we can’t list all the things to do on Gran Canaria in June 2017. But, to borrow a couple of lines from our main man Don Letts, it’s another Gran Canaria Local selection. Crossing time, space, and place.

The capital hosts the lion’s share of things to do on Gran Canaria in June 2017 And the biggest event is one long birthday party: the Fiestas Fundacionales. For on 24th June, Las Palmas de Gran Canaria celebrates being founded 539 years ago.

The fiesta starts earlier, though, on Friday 9th June, in Vegueta‘s Plaza de Santa Ana at 9:30pm with an opening speech from the Museo Casa de Colón director Elena Acosta. This is followed by a free show by Canarian folk music legends Olga Cerpa and Mestisay. They’re joined on stage by legendary Cuba singer, and star of Buena Vista Social Club, Omara Portuondo.

Also listen out for Fuel Fandango. This feisty duo, who fuse electronica and flamenco, play the same square on Friday 16th June. Tickets are available through entrées.es for 12€.

The spectacular climax to the founding parties takes place the following Friday, the Noche de San Juan, on Las Canteras beach. Join the locals nightswimming or watch the fireworks light up the evening sky above the La Puntilla end of the playa. There’s also some free musical performances between 10:00pm and 2:30am at Plaza Saulo Torón, with sets from uptown funkers Viltown, Latin pop star Neo Pinto, and the hard-rocking Mondo Diávolo.

Other musical dates for your diary in the capital during June 2017 include a visit from legendary AC/DC sticksman Phil Rudd and band. They play Triana‘s Paper Club on Thursday 8th June (purchase tickets online at Mastaquilla). Elsewhere, Loquillo ensures the month goes out with a bang, courtesy of his 30th June Gran Canaria Arena concert.

Also in Triana (in an intriguingly secret location) is the Gran Canaria capital’s latest Sofar event, on Saturday 17th June. The whole Songs From a Room concept is so hush hush that you don’t know who the artist is before you arrive at a venue you only discover the identity of the day before. You can however apply for a +1 if you want to try your luck at securing a ticket.

And then there’s Parque Santa Catalina‘s Rockin’ Doo Wop Gran Canaria Festival. Commemorating the sounds and styles of the 1940s and 1950s, this free event held from 16th-18th June combines a vintage market, burlesque shows, and 11 concerts. From the likes of the shaking-rattling-rock-and-rolling The Velvet Candles from Barcelona, Gran Canaria’s very own Bar Riders, and the UK’s The Jive Aces.

Over in Mesa y López, fast photo fun is guaranteed at the XX Concurso de Fotographía Rapída on the 17th. Register by the 15th June for your choice to win a share of the 4,900€ prize money. An exhibition of thew winning entries will take place on the ramblas of Mesa Y López from 1st July.

At the other end of the GC-2, the main event in Agaete is the Fiestas Patronales San Pedro. This programme takes place in the valley of Agaete and starts with the the hoisting of a commemorative flag in the Plaza de San Pedro on Saturday 3rd June before ending with a religious procession on Saturday 1st July. In between, on Wednesday 28th June, Valle residents descend from the highs of Tamadaba with pine branches accompanied by papagüevos, walking puppets with their masters encased within a wooden frame, colourful costumes, and a giant papier-mache head, and the Banda Guayedra and Banda de Agaete.

Lastly in the northern municipalities, Guía‘s La Atalaya celebrates its Fiestas Patronales en Honor a San Pedro in June. On Sunday 11th June, the Plaza de Pedro’s the setting for a Feria Comercial y Artesanal which has a child-friendly Scalextric focus. The following Saturday, there’s a romería where locals deliver mainly edible offerings to the saint (although there always seems to be some going spare for hungry revellers).

There are things to do on Gran Canaria in June 2017 away from the north of the island. In south-east Gran Canaria’s Agüimes, the Ronseal-named Timples y Otras Pequeñas Guitarras del Mundo play the Teatro Cruce de Cultura on Friday June 9th at 8:30pm (buy tickets through entreés.es for 10€). And on Thursday 15th at 9:30pm, there’s a freebie jazz concert at the Caseta Muelle de Arinaga with a Renato D’Aiello trio as part of the Arinaga Noches de Arte series of events.

Summer’s just around the corner. As ExpoMeloneras is the venue for Gran Canaria Moda Cálida‘s Swimwear Fashion Week, from Thursday 15th to Sunday 18th. This exhibition centre’s a short walk from the Faro de Maspalomas bus terminal.

Head to Santa Lucía de Tirajana‘s Vecindario on Saturday 3rd for Hard Skull Fest. This Parque Juvenil de Vecindario event will set you back 12€. Thrash around to the metallic sounds of Angelus Apatrida, Brothers Till We Die, Dead Crooners, Crimson Stone, and Semper.

In Gran Canaria’s most westerly municipality, La Aldea de San Nicolás, has an arts-and-crafts-flavoured Mercadillo y Muestra de Artesanía y Complementos. You have an extra year to get fit for a couple of active Artenara events as it’s too late to subscribe to compete at Friday 16th’s Artenara Vertical and Saturday 17th’s Artenara Trail, although you can still join the spectators.