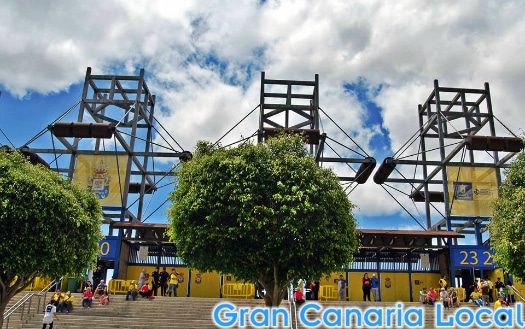 2015-16 was a football season that defied expectation. Over in England, Premier League champions Chelsea slumped to a 10th-place finish whilst rank outsiders Leicester City won the title. Leicester were tipped by many to be relegated, a little like our very own UD Las Palmas who had returned to the Primera Liga after a 13-year absence.

You’re probably already realized, but we’re massive football fans. We’ve already penned a post about how to find a club for you/your kids to play for along with one on local heroes UD Las Palmas. Now even FIFA have got on their act, telling of a special story in Las Palmas. Although it’s been a team effort to survive, we’d like to highlight four individuals who have been instrumental in UD Las Palmas’ surprise season.

The 19th October was UD Las Palmas’ 2015-16 D-Day. For it was the date they appointed Quique Setién after sacking the coach who got them promoted, Paco Herrera. Herrera paid the price for taking just five points from the opening eight games with the 4-0 away defeat to Getafe the coffin’s ultimate nail, leaving Unión Deportiva second bottom in the table.

By the season’s close, Setién had steered UD Las Palmas to a comfortable mid-table finish. He definitely steadied the ship but nearly rocked the boat with Unión Deportiva looking at one point that they might qualify for their Europa League. Setién’s stock certainly rose with the UD Las Palmas manager being heavily tipped to become Vicente del Bosque’s successor as Spain national team boss.

Left winger Momo, Jerónimo Figuero Cabrera to give him his full name, was a peripheral figure in UD Las Palmas de Gran Canaria’s 2014-2015 promotion season. Although we did love to see him celebrating reaching the top flight. So we thought Momo was likely to leave.

And it looked that he was on his way out as he barely featured in Paco Herrera’s top-flight line-up before he enjoyed a renaissance under Quique Setíen. We were lucky enough to get to know Momo the man behind the player as his son plays for the same Real Club Victoria side as our youngest. The guy’s so humble, even when being approached for autographs and photos as the fathers celebrated Real Club Victoria’s title triumph with chupitos of honey rum in the private members’ bar of Club Deportivo Ferreras (not much else is open in La Isleta on a Sunday).

UD Las Palmas boast more homegrown players than any other team in the Spanish top flight other than Athletic Bilbao. So, it’s not much of a surprise to discover that their captain David García hails from the island. The centre back was born in Maspalomas on the 25th January 1982.

The veteran defender probably thought his chance to play in the Primera Liga had been and gone. But he made his debut in the top flight aged 33 in an October 2-0 home defeat to SD Eibar. Rather more happily for club and player, García scored the only goal in an away win over Villareal CF to help UD Las Palmas to their third successive victory.

If you thought 21st-century football’s all about the bling, you’ve obviously never heard of Juan Carlos Valerón. One of the few players to continue into his fifth decade, he was the footballing equivalent of  Eric Wimp. Becoming an unlikely superhero when he similarly donned the yellow of the comic-strip character.

A child of Arguineguín like the equally prodigiously talented David Silva, Valéron made his name off the island. Winning the title with Galicia’s Deportivo de La Coruña. Before returning to his home island club in 2013, and being the modicum of cool when called upon in the 2015-16 season which turned out to be his farewell campaign.