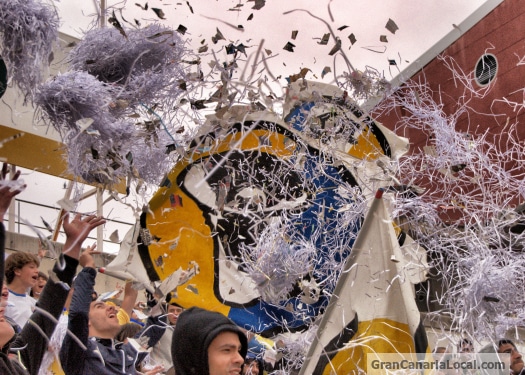 Back in the 60s, England’s Bobby Moore and wife starred in a TV ad encouraging viewers to “look in at the local”. Gran Canaria Local being Gran Canaria Local, it’s advice we’d urge you take on your next visit to the island. Not only by drinking at our bars, but also by watching Unión Deportiva Las Palmas in action. As we did lately, marking our eldest’s 14th birthday by taking in a game vs Hercules CF.

Outside the Estadio Gran Canaria, you’ll see a statue of local hero, David Silva. Although he’s yet to sport the yellow of UD Las Palmas, another GC icon, Juan Carlos Valerón, has returned to play for his home-island club. Capped 46 times by Spain, he also won the Primera Liga title with Deportivo La Coruña. But, against Hercules, he looks his 38 years of age and to use the Anglo-Saxon expression, his legs have gone.

Our eldest likes to sit with the Ultra Naciente. They’re the most vocal of all UD Las Palmas fans, occupying a spot behind the most northerly goal. Fave chants of theirs include Soy Canaríon (I’m Canarian) and Pío Pío (in imitation of the canary which, wouldn’t you know, just happens to be the club’s mascot).

Last season, UD Las Palmas finished 6th in Spain’s Segunda A. They made a play-off final against Almería before being beaten over two legs by the mainlanders. This season, they’re sitting pretty in third place, just a point behind the automatic promotion places. So, by the time you take your seat in the Estadio Gran Canaria, you could well be watching UD Las Palmas up against the likes of Atletico Madrid, Barcelona, or Real Madrid. ¡Pío Pío!