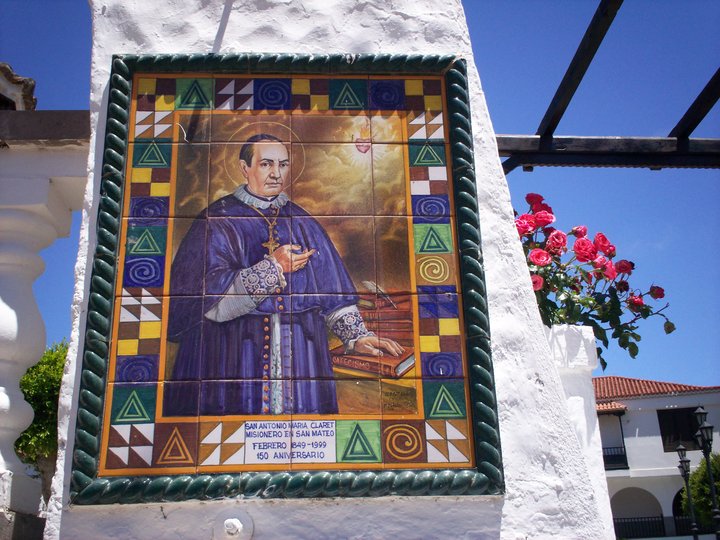 Here stands Padre Claret. Taking pride of place in Vega de San Mateo, he should be known as the patron saint of basketball on the island. For it was in the Claret school founded in his honour that the Club Baloncesto Gran Canaria were originally formed. A fact that’s of much amusement to me as Claret is one of the more exclusive schools on the island and basketball, well US basketball at any rate, is very much a blue-collar sport.

Born in 1807 on the Spanish mainland, in Catalonia, Father Claret would during his later 35 years as a priest, write 144 ecclesiastical tomes and deliver 25,000 sermons. He arrived on Gran Canaria in March 1848. On the 1st May, Claret opened a 28-day mission in Telde which was experiencing great drought.  And, as legend has it, the rain came down as he was finishing off his closing sermon.

This pictorial tribute celebrates the 150th anniversary of his missionary work in Vega de San Mateo. Located in an old part of town which is easy to bypass if you merely follow the new road which leads up from Santa Brigida below, it’s well worth a pitstop. You’ll find San Mateo framed in an amazing setting dwarfed by the Cumbres (Mountainous Peaks) above. Yet there’s as much to see in the town on ground level as there’s on the horizon.

A great way to break up a car journey, Vega de San Mateo’s worth getting out at for popular weekend farmers’ market, the Mercado Agrícola. Then there’s the Antiguo Molino de Gofio (antique gofio mill), Ermita de Lourdes and an Iglesia which dates back to 1800. Last, as in by on means least, you’ll find Casa del Dr. Negrín. Juan Negrin, a native Canarian, was the last Prime Minister of Spain from 1937 to 1939 until his replacement by that dastardly dictator, Francisco Franco.